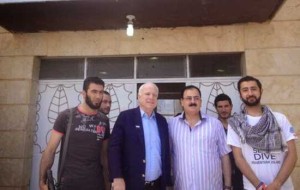 McCain posed for pictures with these ISIS rebels, smiling as the camera snapped. Now, ISIS, Islamic State of Iraq and Syria formerly known as Al Qaeda in Iraq, is using those pictures as a campaign ad.

Poor John McCain and Lindsey Graham, Washington’s real first couple. They only want to arm the ‘moderate opposition’ in Syria. Three years on, how come their master plan isn’t working, while ISIS has grown so strong?

In the light of the recent Paris Attacks it’s more important than ever to take a sober look, and perhaps shine a light on the fact that there are no real ‘moderate rebels’ in Syria, no more than there are in Iraq.

On Tuesday during his State of the Union address, President Barack Obama touted great strides in “pushing back ISIS” with US-led airstrikes in Syria and Iraq. Today, US Ambassador Stuart Jones announced that “Coalition Airstrikes” (US airstrikes) have killed 6,000 ISIS fighters.

This brings us to the issue of who ISIS really is, and how did ISIS build up to the level they are at today. It’s a particularly embarrassing thing to admit, because when you allow this fact out of the bag, then skeptics start asking more questions, and if there’s one thing that politicians hate more than anything, it’s facts and questions.

So, what happened to all of McCain’s “moderate opposition”? You know, the ones which President Obama, John Kerry, David Cameron and the rest of the ‘liberate Syria’ gang insist need our help with more weapons and cash? New Eastern Outlook geopolitical analysis and writer Tony Cartalucci explains:

“Reported along the peripheries of the Western media, it was reported recently that some 3,000 so-called “moderate rebels” of the “Free Syrian Army” had defected to the “Islamic State” (ISIS).  While not the first time so-called “moderates” have crossed over openly to Al Qaeda or ISIS, it is one of the largest crossovers that has occurred. With them, these 3,000 fighters will bring weapons, cash, equipment, and training provided to them by Saudi Arabia, Qatar, the United States, the UK, and perhaps most ironic of all in the wake of the recent terror attack in Paris, France. Indeed, ISIS and Al Qaeda’s ranks continue to swell amid this insidious network of “terror laundering” that is only set to grow.”

This means there’s no “moderate rebels” to speak of, so therefore ISIS is McCain’s Army. Washington’s nation-builders are banking on the fact that Americans are not smart enough, or too brain-dead to work this one out.

Since 2012, the war-obsessed Senator has dedicated a little too much of his valuable taxpayer-funded time to lobbying for more arms and more cash for his “freedom fighters” in Syria, fighters who are well-known outside of Washington to be all but ubiquitous with violent terrorist fighting groups al Qaeda, al Nusra, Front Victory and ISIS/ISIL/IS.

The first hint we had of Washington’s desert rat installment Operation Fast and Furious, came in September 2012, when a rented villa in Libya’s port city of Benghazi went up in flames. Later we find out that the makeshift ‘embassy’ was really part of a clandestine CIA complex where the US was organizing the shipment of ex-Gaddafi arms stocks over to Obama’s burgeoning new bloodbath in Syria.

Libyan Islamic fighting groups who worked hand-in-hand with US, British and French, and NATO intelligence agencies to topple Gaddafi in 2011 – were openly flying the al Qaeda and ISIS ‘black flag’ after Gaddafi’s gov’t collapsed, before and during the time they were shipped on to fight in Syria against Bashar al Assad’s gov’t forces – on behalf of those verysame NATO-allied agencies. 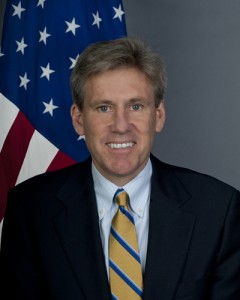 WND’s report continues: “In early 2011, before Gadhafi was deposed, Christopher Stevens came to Benghazi in a cargo ship, and his title at the time was envoy to the Libyan rebels,’ which basically means Christopher Stevens was America’s very first envoy to al-Qaida,” explained Clare Lopez, a member of the commission who served as a career operations officer with the CIA and currently is vice president for research at the Washington-based Center for Security Policy.

Then we learned on Sept 13, 2013, how Obama had openly announced financial and military aid to the “moderate rebels” (now ISIS recruits). US politicians were brimming with excitement at the time, proudly coming out of the closet on their brilliant new program. Mark S. Ward, the State Department’s senior adviser on assistance to Syria boasted, “This doesn’t only lead to a more effective force, but it increases its ability to hold coalition groups together.” Indeed. Look how effective ISIS has become. Nice work Mark.

As hundreds of thousands of pro-life demonstrators participated in the March for Life in Washington, D.C., to protest abortion, President...