As Greece prepares for an election which could decide the fate of Europe, find out how the EU project is slowly falling apart in the ten major member states and two cities which form its heart. 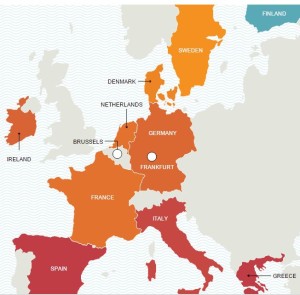 Europe is being swept by a wave of popular disenchantment and revolt against mainstream political parties and the European Union.

Once, Britain’s Euroscpeticism was the exception, and seen as the biggest threat to the future of the EU.

But now other countries pose a far bigger danger thanks to the political discontents unleashed by the euro,

In Greece, a far-Left Socialist party, Syriza, is poised to win elections with a political programme that would overturn eurozone policies. Many believe the Greek revolt against the loss of their economic sovereignty by eurozone diktat from Brussels or Frankfurt is only the beginning

In France, Italy and Spain, voters are kicking against mainstream parties that they see as upholding EU institutions such as the euro while failing to represent their own people, the voters.

In Britain, the Netherlands, Sweden, and Denmark it is immigration that has become the touchstone for a popular sense that institutions do not represent them.

Even in Germany the cracks in the European political order are beginning to show.

It might be too early to call this the death of European unity.

But the outlook for what Winston Churchill prophetically called a “United States of Europe” has never been stormier.

Convicted by the FBI and DOJ—Obama, Holder, Sharpton