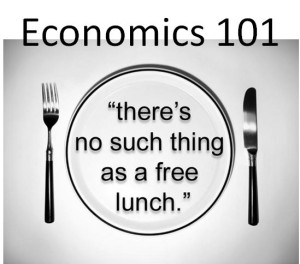 You can always count on our President, Barack Obama, for some gimmicky giveaway idea that will appeal to the nearly untutored who don’t understand the one simple fact that is never, ever discussed when Obama unveils his latest brainstorm.

They never seem to be able to understand the simple idea that NOTHING IS FREE.  Ever.

Obama has proposed that if you are still breathing, you ought to be able to get an Associate’s Degree from any of the thousands of community colleges in the United States without having to pay for anything.  His proposal is, predictably, vague and in Googling the web there seems to be absolutely zero details to be analyzed by those who ask critical questions or those who want details to flesh out a defense of the Nitwit-in-Chief.

For example, if an aspiring applicant to a community college never completed high school, will the Federal government cough up the tuition for someone who isn’t likely to complete a two-year degree?  Will applicants be required to do well enough on the SAT or ACT exams to be admitted, or will this new program simply waive that requirement and require community colleges to admit any and all that apply?

Will each of the states, who are currently the primary funding source for community college, be required to establish a uniform syllabus that allows a student to major in any particular subject regardless of which community college that will be attended?  Will the states determine the degree of uniformity of curriculum or will that evaluation be made by the Federal Department of Education?

Will the states require that a graduate from any community college be qualified to transfer the credits that they earn to a four-year institution to complete a bachelor degree?

Will these payments in the form of tuition support allow reimbursement for ANY subject being studied?  Accounting, programming, small engine repair, and so on have connections to job-related opportunities, since Obama has indicated that he wants to help students get a leg up on finding a good job.  What about requiring taxpayers to help students who want to study fine art?  Or archaeology? What are the job opportunities in those areas?

Will this “new-and-improved” Federal program, and it’s payment plan, recognize the fact that there are other organizations that currently offer financial aid from other Federal programs, state programs, private scholarship programs?  Will the amount of aid offered to students be adjusted by the amount of funds those students already receive from other government aid programs?

Of course the last program that passed through Congress to demonstrate their belief that Obama knew better than anyone what the nation needed was nicknamed Obamacare.  He personally never got involved in the details of the legislation himself, of course, nor in the implementation phase of his namesake.  Yet even with his name behind it, it is still opposed by a majority of citizens.

With that kind of support history, and after being soundly defeated by Republicans in Congress and the majority of state houses and state legislatures, why would Obama even put such legislation on his State of the Union Address.  It makes almost no sense at all.  Almost.

Barack Obama has the type of personality that makes it impossible for him to accept responsibility for any error, wrongdoing, stupidity, aberration, blunder, miscalculation, … well, you get the idea.  So if his proposal for “free” community college education falls in any of these categories, the first pre-programmed response from the White House will be announced with about the same speed as a fund raising email from Obama himself.  It will explain with vitriol that the reason that this brilliant idea isn’t being implemented by Congress is only one, single word – Republicans!  (OK, maybe they’ll use two words – “Obstructionist Republicans!”)

If that doesn’t get MSNBC, CNN, ABC, CBS, NBC and PBS foaming at the mouth, they also have a sure-fire backup plan.  Just replace the word “Republicans!” with the word “Racists!”, and then have the Reverend Al Sharpton (although just who reveres Al is a mystery to many people) rant for a couple of days on that very subject.

So, with that background of planning, maybe the idea of proposing free education actually does have a 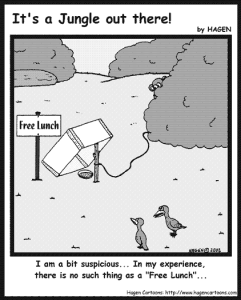 hint of some sense to it.  Ignore the fact that Obama actually could not care less about seeing young, middle-class or lower strivers make economic or social progress.  And even though the sense is perverse, warped, contorted (feel free to continue through your thesaurus) permeates this proposal, as it does with every Obama proposal, there is a sense behind it.  The sense centers on what Obama wants and needs.  It has absolutely no connection to what the nation wants or needs.

It’s a shame that the “Smartest-Guy-in-the-Room” doesn’t seem to have answers to any of these questions.

Abortion Killed 19 Times as Many Blacks as Murder

(CNSNews.com) – For every black murder victim in 2011 there were 19 blacks killed by abortion, according to data from...