Miss Lebanon can breathe a sigh of relief: Despite the fact that a photograph of her alongside with Miss Israel appeared on the internet, she will not be stripped of her title or punished. 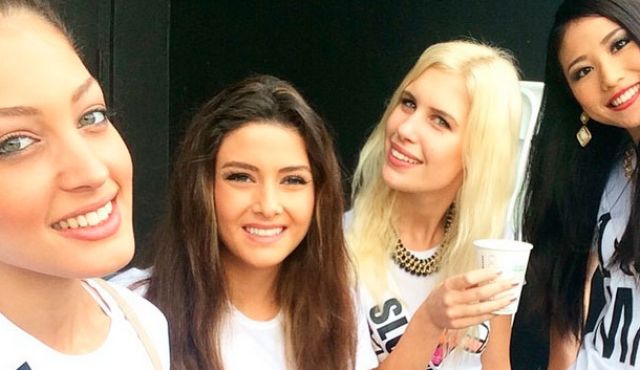 “According to the information we obtained, Miss Lebanon [Saly Greige] did not have bad intentions that necessitates her being stripped of her title or punishment,” Michel Pharaon, Lebanon’s Tourism minister, said on Friday, according to the Telegraph.

He spoke after photographs taken at the Miss Universe contest in Miami showed beauty queens from Israel, Slovenia and Japan around Miss Lebanon, causing uproar back home.

Lebanon and Israel remain at war and it is illegal in Lebanon to have any contact with an Israeli.

“Miss Lebanon has been the subject of a racist and random campaign,” said Pharaon. “I see that we should support her.”

Amid calls for her to be stripped of her title for “consorting with the enemy”, Greige claimed that she did not want a photograph with Miss Israel, Doron Matalon, and that Matalon had “photobombed” her.

“From the first day I arrived at the Miss Universe pageant I was very careful not to take any pictures with Miss Israel, who tried repeatedly to take pictures with me,” Greige wrote on Instagram after the photo appeared.

“While I was preparing with Miss Slovenia and Miss Japan to get our photograph taken, Miss Israel jumped in and took a selfie with her phone and posted it on social media.”

“This is what happened,” she added. “I hope you continue supporting me.”

Her agent went further, claiming, according to the Telegraph, that Greige had to “run away” several times because she was chased by Matalon.

“It was 100 per cent deliberate. I can confirm that it was organized and planned since November 2014,” he said. “’Miss Israel was trying from the beginning to reach Saly and to have a selfie with her during the 20 days they stayed there.

“They were both sitting together once at the Marriott Hotel and Miss Israel came and asked Saly to have a selfie with her,” he added.

“Saly refused, of course, since she’s perfectly aware of the conflict with Israel, and the whole situation in Lebanon.”

In Case You Missed It:  NYC, DHS will release non-toxic gas at 100-plus locations in preparation for chemical, biological attack: Is Biden's America in danger?
Posted in Israel and tagged Freedom, Islam, Israel, Jihad, Lebanon, Terrorism.

By Jim Yardley You can always count on our President, Barack Obama, for some gimmicky giveaway idea that will appeal...