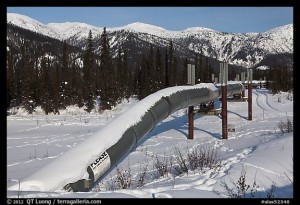 About a third of all the jobs in Alaska are connected to oil exploration and development. And the ability to keep the oil industry vibrant in Alaska is very much dependent on the Trans-Alaska pipeline. So you’d think an administration that claims to be about keeping good jobs viable would have an interest in seeing to it that oil continues to flow freely through the pipeline – not only for the sake of Alaska’s economic viability but also for the sake of the nation’s energy security and independence.

You’d think that, but you’d be wrong if you were talking about the Obama Administration. And lamentably, of course, we are.

Thumbing his nose at the Republican Congress once again, Obama has just used executive authority put another 12 million acres of Alaska’s Arctic National Wildlife Refuge off limits for oil development. The result could be nothing short of the total dismantling of the pipeline – and of Alaska’s economy along with it:

President Obama announced Sunday that he’ll use his executive authority to designate 12 million acres in Alaska’s Arctic National Wildlife Refuge (ANWR) as wilderness, walling it off from resource development. This abrogates a 1980 deal in which Congress specifically set aside some of this acreage for future oil and gas exploration. It’s also a slap at the new Republican Congress, where Alaska Sen. Lisa Murkowski has been corralling bipartisan support for more Arctic drilling.

The ANWR blockade also seems to be part of a larger strategy to starve the existing Trans-Alaska pipeline, the 800-mile system that carries oil south from state lands in Prudhoe Bay. ANWR occupies the land east of that pipeline. The Interior Department this week will release a five-year offshore drilling plan that puts vast parts of the Chukchi and Beaufort Seas—the area to the north of the pipeline—out of bounds for drilling. This follows an Administration move in 2010 to close down nearly half of the 23.5 million acre National Petroleum Reserve-Alaska (NPRA)—the area west of the pipeline.

Federal agencies have also been playing rope-a-dope with companies attempting to drill on the few lands that are still available. ConocoPhillips has been waiting years for permits to access a lease it purchased in NPRA—and the Administration is this week expected to make that process even harder. Shell has spent $6 billion on plans to drill in the Chukchi and Beaufort, only to be stymied by regulators.

The Arctic Outer Continental Shelf is estimated to hold at least 27 billion barrels of oil. ANWR is thought to have at least 10 billion more, while NPRA—designated in 1976 as a strategic petroleum stockpile—is considered equally rich. Yet not one drop of oil is flowing from these areas, and Mr. Obama seems intent on ensuring that none does.

The political prize here is the death of the Alaska oil pipeline, which in its heyday pushed some 2.2 million barrels of oil south a day, but has seen volume slow to 500,000 barrels a day as the state’s existing oil fields decline. The drop in oil prices has increased financial pressure on Arctic drillers, and any lower flow threatens the viability of the pipeline.

This, I guess, is the downside of plummeting oil prices. It gives Obama and excuse to pull crap like this, on the premise that there’s plenty of oil in product and prices are low enough, therefore we don’t need the ANWR oil. It’s giving Obama too much credit to call that short-term thinking, because he’s not engaging in any sort of serious economic analysis anyway. He’s just using the occasion of gas prices under $2 a gallon to do something he wants to do anyway, figuring the political blowback will be limited or non-existent.

In truth, of course, ramping up oil exploration in Alaska is a huge opportunity to strengthen the U.S. economy on a long-term basis by putting to work a valuable resource that we can not only use but sell at a profit to the rest of the world for a long time. And when Democrats talk about environmental liabilities, they completely ignore the advances in drilling technology that make it a much different ballgame than it was 40 or even 15 years ago.

Obama has simply engaged in yet another assault on this nation’s economic vitality, just because he can, and he wants the Republican Congress to know there’s not a thing they can do to stop him. That’s not true, but they would have to have the stomach for the fight. It remains to be seen if they actually do.

The election victory of Greece’s Syriza party and Alexis Tsipras is “bad news for Israel.” The party has constantly identified...