By INSS Mark A. Heller 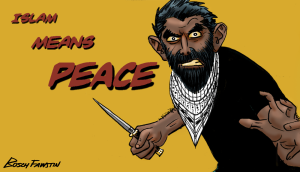 Like the leaders of other Western countries targeted by Islamist terrorists, French President François Hollande has insisted that the recent attacks in Paris are not a product of Islam. In a press conference immediately following the atrocity in the offices of Charlie Hebdo, Hollande stressed that “Islam has nothing to do with the terrorist attacks.” A week after the 9/11 attacks in the United States, President George W. Bush made the same argument, telling an audience of American Muslims that “Islam is peace.” So too did British Prime Minister Tony Blair, who asserted that though his own capital city’s transport system was methodically attacked in 2005 by Islamist terrorists, “there is no doubt about its [Islam’s] true and peaceful nature.”

At first glance this is all arrant nonsense, for which these and others leaders are rightly criticized. After all, they are neither Muslims nor scholars of Islam and have no qualifications to pronounce on the essence of the religion. Moreover, terrorists operating against Western targets themselves believe and insist that their acts of brutal violence against non-Muslim targets are indeed inspired, even required by Islam. The same is true of the plethora of terrorist movements—ranging from Boko Haram through Islamic State to the Afghan and Pakistani Taliban – inflicting unimaginable cruelty on other Muslims who have strayed from “the true path.” And there is much in the body of the Quran, the hadith (sayings of the Prophet) and the sira (traditional biographies of the Prophet) to sustain that conviction – one shared, by the way, by countless other Muslims who endorse and support terrorist acts and identify with the terrorists even if they would never themselves engage in such behavior.

Still, arguing the opposite is not necessarily evidence of intellectual dishonesty or sheer ignorance. For the fact is that there also exists a persuasive body of Islamic sources that reject, discredit, and condemn terrorist behavior, and advocates of a different Islam can point to a wealth of directives enjoining Muslims to show compassion and largeness of spirit and to abjure any compulsion in religion. The existence of so many contradictory sources means that “correct” definitions of authentic Islam are the subject of controversy and disputation; there are at least four recognized schools of jurisprudence that differ in their stricter or looser construction of law. In the absence a universally-recognized authority to pronounce on doctrinal validity – a Muslim equivalent of the Catholic or Coptic Pope – these differences can never be definitively settled. As a result, any effort to understand the correlation that may exist between terrorism and Islam would do better to focus not on what the texts and sources say, but rather on what Muslims think and do.

Here too, however, the evidence is equivocal. Without comprehensive Muslim elections or referenda or methodologically sound surveys of world Muslim opinion, conclusions based on Muslim expressions and types of behavior are inevitably impressionistic. Impressionistic evidence suggests that while most terrorists (and victims of terrorism) are Muslims, most Muslims neither engage in nor endorse terrorist violence. Beyond that, it is difficult to say anything of value, even about the relative sizes of the assumed majority and minority.

Given that the debate about the “truth” of the Muslim-terrorism nexus is ultimately inconclusive, Western political leaders would be better advised, at least in the name of intellectual integrity, to stay out of this theological/ideological minefield.

There is, however, a different consideration that is more relevant to the function of leadership that they are expected to perform: political prudence. More than private individuals, political leaders need to weigh the consequences of their words. Asserting that there is no intrinsic connection between Islam and terrorism has no operational or strategic downside. Asserting the opposite risks inviting violent retaliation against what are ultimately pointless words. If that were the only consideration, then a case could be made – which many critics do make—that refusing to acknowledge truth simply for fear of the reaction would be indefensible appeasement. But stating a truth that is not self-evident would also transform large numbers of Muslims who now oppose terrorist violence or are at least ambivalent about it into sympathizers, fellow travelers, or active supporters, thus distorting the intra-Muslim debate. Moreover, proponents of the argument that there is a tight connection will be struck dumb when asked the inevitable next question, “So what do you propose to do about it?” After all, they may have all kinds of ways to fight terrorism but they have none to fight Islam.