The Jordanian pilot from the U.S. led-Coalition Muath Al-Kassasbeh is arrayed in front of armed terrorists as if this was part of a Roman arena, to be caged like an animal, and then with professional filming as if it was scripted from a Hollywood movie on how the ancient Romans entertained themselves with human suffrage during the dark pre-Christian history. 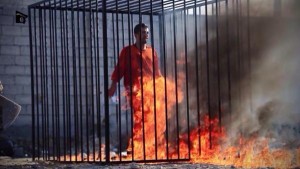 But this is Muslim reality TV at its best, a plunge into the dark history of Islam. The POW pilot is then soaked with petrol and set on fire while professionaly filming his slow suffering as a sacrificial offering to Allah and with no remorse to the screaming and melting of a human being. This is not something we suggest you watch, but ask: how can the world stand idly by while we see this and still think that Islam is a peace loving religion?

And so the method on how to kill Al-Kassasbeh was not some dreamed up concoction, but stemmed from Islam as the quest on how to execute him circulated the Muslim world. In the burning scene video (see 1:00 above) ISIS gave the Islamic edict straight from the top Islamic authority of Ibn Taymiyya’s jurisprudence:

“So if horror of commonly desecrating the body is a call for them [the infidels] to believe [in Islam], or to stop their aggression, it is from here that we carry out the punishment and the allowance for legal Jihad”

To desecrate the victim while alive is part and parcel of Islam in hope that people would convert through sheer fear or to repulse the enemy.

We were able to secure the extended video released by the Islamist website Al-Furqan which spills out the intelligence plans of U.S.-Led coalition: airstrikes, airport locations, logistics, including a list of Jordanian pilots asking Muslims to target and execute them:

WATCH AT YOUR OWN RISK. IT’S PROBABLY THE WORST THING YOU’VE EVER SEEN. IT’S HORRIFYING.

Tuesday, for the fourth time, the U.S. House will vote to fully repeal Obamacare. What’s different, though, is that with...