Barack Hussein Obama met with American Muslim leaders yesterday, according to the White House schedule, but so far the administration is refusing to reveal who attended the meeting, which was closed to the press. 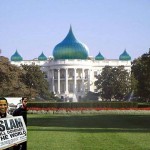 The White House released a readout of the meeting explaining that Obama discussed “a range of domestic and foreign policy issues” including Obamacare, police fairness, anti-Muslim discrimination, and the upcoming Summit on Countering Violence Extremism.

“The President discussed the need to continue countering ISIL and other groups that commit horrific acts of violence, purportedly in the name of Islam,” the readout continued.

White House Press Secretary Josh Earnest defended the meeting during his daily press briefing, pointing out that it wasn’t “unusual” for the president to meet with “a wide variety of communities from across the country.”

But the White House was unwilling to release the names of leaders who attended the meeting.

A request to the White House for a list of names of those who attended the meeting was not returned.

According to the readout, Obama thanked the visitors noting that “his regular interactions with different faith communities provided him with valuable insights and feedback.”

Twenty-six states are suing the federal government over President Obama’s executive actions on immigration, but U.S. senators representing 10 of those...