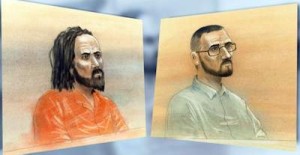 The trial of Chiheb Esseghaier and Raed Jaser is currently underway in a Toronto courtroom this week. Esseghaier is from Tunsia and in Canada studying for a PhD while Jaser is a Palestinian who is a permanent resident of Canada.

The two men were arrested on April 22, 2013. Esseghaier was arrested without incident at a Montreal fast food restaurant while Jaser was similarly taken into custody at his Toronto job. Their arrests were part of “Project Smooth,” a joint Canada/US operation.

Both men were charged with six terror-related offences involving a plot to blow up a VIA rail train somewhere in Ontario. Not surprisingly, these two practitioners of the religion of peace proclaimed their innocence.

Esseghaier and Jaser were surreptitiously recorded having a conversation about Islam in a Toronto park on September 11, 2012. Although the two showed their hatred and contempt for Canada, they were munching on Timbits, a snack acquired at a Tim Hortons, a landmark Canadian institution.

They hate Canada because a man can have “50 girlfriends” but can go to jail if they have two wives. They hate Canadian women who allow themselves to be “handled” by men. The pair also showed their dislike of moderate Muslim women who refuse to be fully covered. On the plus side, they do seem to like their Timbits.

Aside from hating the country that allowed them to reside within its borders, they gave a good description of their own religion. Jaser said the solution to what they hate about Canada is found in Islam and in “Sharia law; in a caliphate that rules everyone. There’s no meeting halfway, no holding hands and singing kumbaya. Islam is not a religion of choice. Islam forces itself to the world. Islam is here to conquer, not as an option. There is “no you have your religion and I have mine.”

The statements were made in the presence of a Muslim undercover FBI agent. He was told they act normal in public but turn to jihad at the flick of a switch. Esseghaier and Jaser had no problem with taking the lives of innocent men women and of course children travelling on a train in Ontario.

What is interesting is how Canadians will react to the beliefs of Esseghaier and Jaser about the total incompatibility of Islam with Western values. There are, of course some people in the West who would give these guys kudos for telling the truth about their religion. What Esseghaier and Jaser said about jihad is consistent with the beliefs of Muslim extremists. Taking their cue from the Koran, the purpose of Islam is to conquer the world. It is incompatible with other religions and Sharia law must be paramount. Conquering must be done by any means possible including the deaths of innocent train passengers. Islam, as viewed by these two, poses a real threat to the world.

But what will so-called moderate Muslims and those on the left say about the discussion the two men had in a park where they were surrounded by children on an autumn day in Toronto? It is pretty well a given that other Muslims will have very little to say. And if those on the left of the political spectrum comment at all, they will be quick to make excuses for Esseghaier and Jaser who will be seen as victims of an uncaring Canada.

There will be the ‘Islam has nothing to do with Islam’ crowd that will maintain Islam is a peaceful religion and the two, one who was a PhD student are just too dumb to think that their beliefs could possibly be related to Islam. No doubt Liberal leader Justin Trudeau will blame Canada for making these two poor immigrants feel “excluded” from society. And NDP leader Thomas Mulcair will think that these guys are simply mentally ill, just like the two who carried out terrorist attacks on Canadian soil last October.

At least Canadians, or at least those who care know that Prime Minister Stephen Harper understands exactly what is going on. It is a safe bet the lefties will not have much to say about the jihadists because the conversation recorded in the park does not fit with the narrative of the progressives that the alleged proposed actions have nothing to do with religion. It would be nice if this recorded conversation resulted in some people discovering the danger of global jihad for the first time, But not very likely.

If they are convicted and sentenced to long prison terms, there will be those that will worry about whether or not they will ever again be able to eat Timbits.

In Case You Missed It:  Study: Over Half of Migrants and Refugees Are on American Taxpayer-Funded Welfare
Posted in Terrorism and tagged Canada, Crime, Immigration, Islam, Jihadists, Muslims, Terrorism.

By A. Dru Kristenev  Standing before a National Prayer Breakfast gathering, President Obama traveled the pitted road of selective memory...