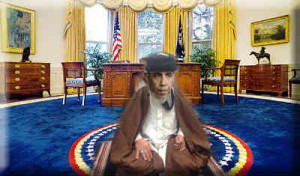 We can hear it now, much closer than ever before, the Islamic call to prayer, not in the far away MidEast, but here in the villages, towns and cities we call home.

We’ll be hearing it more often as it begins to drown out the peals of church bells, now that Barack Hussein Obama came out as Imam Obama at Thursday’ National Prayer Breakfast.

The president did not formally introduce himself as Imam Obama, not in so many words.  That would have been too direct and up front, but he was suddenly Imam Obama all the same.

“Unless we get on our high horse and think that this is unique to some other place, remember that during the Crusades and Inquisition, people committed terrible deeds in the name of Christ,” Obama preached.  “In our home country, slavery and Jim Crow all too often was justified in the name of Christ.” (MyWay, Feb. 5, 2015)

The blame game he invokes for every situation this time went all the way back to over 700 years ago.

The Crusades and Inquisition, of course were fought to the death by two sides, but Imam Obama is simpatico to only one.

The Muslims, incidentally, won the Crusades

Obama, who says he is a Christian,  rarely goes to church and gets his daily morning prayer delivered to him over his phone.  And when he did go to church it was at Trinity United Church of Christ, where he spent 20 long years listening to Jeremiah Wright curse America.

It was Obama,  who in recalling the opening lines of the Islamic call to prayer during a New York Times 2007 interview recited them “with a first-rate accent”, describing the call to prayer as “one of the prettiest sounds on Earth at sunset.”

To the world’s millions of Christians, there are no prettier words than, “My Lord and my God”.

At Thursday’s National Prayer Breakfast, Obama said that while religion is a source for good around the world, people of all faiths have been willing to “hijack religion for their own murderous ends.”

“So it is not unique to one group or one religion,” Obama said. “There is a tendency in us, a simple tendency that can pervert and distort our faith.”

Imam Obama’s words were an insult to Christians and the Christian faith, dressed to kill in the kind of rhetoric you would expect from an imam holding forth at a mosque, but never at the White House.

There were 3,600 in attendance, including those of other faiths.  Not one of them rose in defense to set the record straight when Obama talked about the “terrible deeds committed by people in the name of Christ”.

It was as though the words of Imam Obama had never been uttered.

Imam Obama does not include Islamic terrorism on the rampage among people of all faiths willing to “hijack religion for their own murderous ends”.

Only time will tell where Imam Obama will go after coming out at the National Prayer Breakfast.

But untold legions of Christians will continue to carry on as before in fervent hopeful prayer to be delivered from all evil.

Meanwhile, Psalm 20:7 is the one that applies best to Obama’s new role: “Some boast in chariots and some in horses, but we will boast in the name of the LORD, our God.”

By Dan Calabrese Next thing you know, we’ll find out he didn’t really come under fire in Bosnia. Or that...