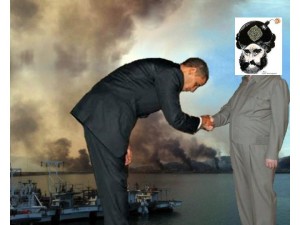 The safety of civilians who gather in all corners of the world is truly paramount to Western leaders, they should look at the possibilities of expanding the North Atlantic Treaty Organization’s ( NATO’s)  mandate to one that can keep close watch and regulate with full authority any and all elected officials who patently refuse to term Islamic terrorism as Islamic terrorism, identifying it instead as “random attacks”.

NATO was formed shortly after the end of the Second World War to counter the threat of Soviet invasion of Western Europe. The treaty setting up the alliance was signed in 1949 by 10 Western European nations as well as Canada and the United States. NATO’s mandate is to provide a common defence for the European and Atlantic areas, and to address common issues faced by the member countries.

Islamic terrorism on the rampage has become a common issue faced by NATO member countries.

Just as “loose lips sink ships”, meek talk lets terrorists walk.  There’s no getting around it, watering down the true name of the murderous atrocities of radical Islamic terrorism for reasons political or otherwise, puts human lives at risk.

It is not the term “Islamic terrorism” that should be expunged from the public lexicon but “random” attacks”, “workplace violence” and any and all other terms watered down by elected officials who are, in effect,  deliberately or inadvertently giving the scourge of Islamic terrorism a pass.

The horror of Islamist terror is on a current world rampage with little or no Western defense against it, as proven once again today, this time in Copenhagen, Denmark, where a copycat Charlie Hebdo attack claimed another civilian life and wounded three others,  after 200 bullets were fired into a cafe during a failed assassination attempt on another cartoonist on whom Islamic terrorists wanted to exact revenge for having insulted the Prophet Mohammed.

“A man, aged 40, was killed when two masked gunmen sprayed bullets into the Krudttoenden cafe in the centre of the Danish capital this afternoon. (Daily Mail, Feb. 14, 2015). 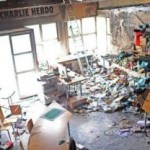 During an interview on Tuesday, Obama said, “It is entirely legitimate for the American people to be deeply concerned when you have a bunch of violent, vicious zealots who behead people or randomly shot a bunch of folks in a deli in Paris,” comments which caused a storm for failing to acknowledge that the target was chosen to attack Jews.(Jerusalem Post, Feb. 12, 2015)

“Speaking to The Jerusalem Post on Thursday, Ben-Dahan of the Bayit Yehudi party said it was impossible that the Islamist terrorist who attacked the kosher supermarket, Amedy Coulibaly, chose the target at random, given the details of the case released by the French police.

“Coulibaly himself told BFMTV, a French radio station he called while he was holding the customers in the store hostage, that he had chosen the shop because he was targeting Jews.

“If you close your eyes and pretend that anti-Semitism and Islamist terrorism doesn’t exist it just leads to more tragedies.

“We’re in a very grave situation when the leader of the US, who is meant to be the leader of the democratic world, ignores reality and does not see with open eyes Islamic terror as it really is and how it appears in many places around the world.”

“Ben-Dahan went on to criticize Obama’s general Middle East policy, saying he had made several mistakes, including his Cairo speech in 2009, allowing the regime of Egyptian president Hosni Mubarak to fall, and for failing to address the Syrian civil war in which the deputy minister noted “more than 200,000 civilians have been killed.”

Meanwhile two gunmen are still at large after the attack in Copenhagen which police are investigating as a ‘terror act’.

“It is believed the target was Lars Vilks, the controversial Swedish cartoonist who drew the Prophet Mohammed as a dog.  (Daily Mail)

“Three police officers were also injured in the attack on the cafe, which was hosting a debate on art and freedom of speech when it was targeted.

“Denmark’s security service, PET, said the circumstances surrounding the shooting ‘indicate that we are talking about a terror attack.’

“Controversial Lars Vilks was said to be talking at the event, entitled Art, Blasphemy and Freedom of Speech

“The cafe had been hosting a debate titled Art, Blasphemy and Freedom of Expression, featuring a number of controversial speakers.

“Niels Ivar Larsen, who was speaking at the event, told how he forced to take shelter as the gunmen opened fire indiscriminately at the cafe.

“He said: ‘I heard someone firing with an automatic weapons and someone shouting.

“Police returned the fire and I hid behind the bar. I felt surreal, like in a movie.’

“Vilks, a Swedish artist known for his provocative drawings of the Prophet Mohammed, has faced several attempted attacks and death threats after he depicted the Prophet as a dog in 2007.
“As a result, he is guarded by police any time he visits Denmark. Some are speculating he was the intended target of the attack.

“Sweden’s security police said Swedish bodyguards were with Vilks at the time of the shooting.

“Authorities in southern Sweden said they were helping Danish police in the hunt for the gunmen. Sweden is joined to Denmark by bridge, and transit across is largely unchecked – sparking fears they may have followed Mr Vilks into the country in an assassination attempt.”

Meanwhile, it is time for western leaders to do so much more than walk arm-in-arm in a photo-op ‘Je Suis Charlie’ rally;  so much more than laughingly pose for selfies during sombre memorials honouring the dead.

Most significantly, it is time for the western leaders to to stop downplaying the horrors of Islamist terrorism by watering down the terminology used to identify terrorists and terrorism.

It’s time for all Western leaders to protect the civilian populations of their countries against the spreading scourge of what the honest and rational among us call: ISLAMIC TERRORISM.

3 wounded in shooting near Copenhagen synagogue, hours after deadly attack on cafe

FOXNEWS
DEVELOPING: Three people have been injured, including two police officers, in a shooting near a Copenhagen synagogue early Sunday, just hours after a gunman with an automatic rifle opened fire on a cafe hosting a free speech event organized by a controversial Swedish artist who has faced threats for his caricatures of the Prophet Muhammad.

Are We Seeing History Repeat Itself?

By Alan Caruba  “Those who do not remember the past are condemned to repeat it” is the famed quote of...