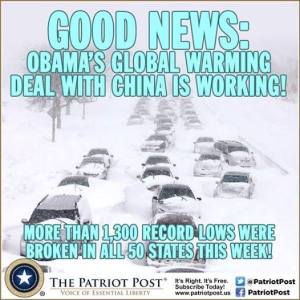 Flashback: Climatologist Dr. Pat Michaels: ‘The raw temperature data is continually adjusted to show more warming’ – PATRICK J. MICHAELS and PAUL C. “CHIP” KNAPPENBERGER: U.S. temperature ‘history has been repeatedly “revised” to either make temperatures colder in the earlier years or warmer at the end’ -‘A major and ongoing federal effort has been to try and cram these numbers into the box imposed by the theory that gives the government the most power—i.e., strong global warming.’

– ‘Please be advised that this history has been repeatedly “revised” to either make temperatures colder in the earlier years or warmer at the end.  Not one “adjustment” has the opposite effect, a clear contravention of logic and probability.  While the US has gotten slightly warmer in recent decades, compared to the early 20th century, so have the data themselves.  It’s a fact that if you just take all the thousands of fairly evenly-spaced “official” weather stations around the country and average them up since 1895, that you won’t get much of a warming trend at all.   Consequently a major and ongoing federal effort has been to try and cram these numbers into the box imposed by the theory that gives the government the most power—i.e., strong global warming.’

NOAA’s National Climatic Data center caught cooling the past – modern processed records don’t match paper records – ‘The average state temp records used in current trends analysis by NCDC do not reflect actual published records of such as they appeared in Monthly Weather Reviews and Climatological Data Summaries of years past…looked at entire years of data from 1920s & 1930s for numerous different states & found that this ‘cooling’ of old data was fairly consistent across the board…Is this purposeful mendacity, or just another example of confirmation bias at work?’

Rewriting Their Own Temperature Past At The National Academy Of Sciences: ‘Massively altered temp history since their 1975 report. They have eliminated most of the 1940-1970 cooling’ – ‘If they didn’t tamper with the data, there is no global warming since 1940.’ – In 1978, NOAA reported 0.5C global cooling from 1960-1965. NAS has almost completely erased that.’

NASA’s James Hansen in 1999 before feds tampered with temp data: ‘In U.S. there has been little temperature change in past 50 years…in fact, there was a slight cooling throughout much of country’

U.S. ‘Hottest Year’ ever?! ‘The past has been massively cooled, and the present has been massively warmed. A cooling trend has been turned into a warming trend, by adjusting the data’ – ‘NOAA makes bold press releases based on hugely altered data, and makes no mention that the data is altered. Then when called out, they claim that the adjustments are small, when in fact the adjustments are larger than the trend. The 1930s used to be by far the hottest decade, before the data was adjusted’

Exciting News from NASA’s James Hansen – The 1970s Ice Age Scare Has Now Been Completely Erased — Temperature revisions wipe out past cooling! – Hansen ‘has succeeded in erasing the entire cooling trend from 1940 to 1975.’

Rewriting The Past At The Ministry Of Truth: ‘In 1975, NCAR’s graph of global cooling showing temps plummeted from 1945 to 1970 — Muller’s 2011 graph, showed that the cooling never happened’ – ‘The cooling after 1950 has disappeared. Winston Smith would be proud!

The Past Cannot Be Erased: Treasure Trove Of 1970s ‘Global Cooling’ Articles Uncovered — ‘Popularity of scientists predicting an ice age is very clear up to 1979?

The Real Hockey Stick: ‘US summer temperatures have declined over the last 80 years’ — But ‘NCDC has created a hockey stick of adjustments, cooling older temperatures by as much as two degrees’

Presto! There was no global temperature standstill! Warmists rewrite temperature data to claim: ‘Global Warming Since 1997 Underestimated by Half’ – Physicist Dr. Lubos Motl ridicules new study: ‘The climate alarmists didn’t like the people’s increasing knowledge of the ‘global warming hiatus’ – about the 350th proof that they’re pseudoscientists – so they needed a paper to ‘explain’ the hiatus away.’ — ‘To make the story short, they decided that HadCRUT4 can’t be perfect if it shows too little warming trend since 1997 or 1998. So a problem with HadCRUT4 has to be found out. They decided that the gaps in the reported temperature are the problem and this problem may be exploited. So they designed a new method to “guess” the missing temperature data at various weather stations and various moments by extracting some data from the satellites. They liked the result, it seemed to be able to calculate the missing figures – and especially because the warming trend since the late 1990s was raised by about 0.5 °C per century which means that it doubled or tripled relatively to the “statistical zero” reported by HadCRUT4.
Presto: Adjust temps to create more warming: ‘The adjustments they are making are greater than claimed trend, meaning that all man made US warming is occurring inside ORNL & GISS computers’ – ‘Almost 2 degree US upwards adjustment trend being applied by USHCN between the raw thermometer data and the published monthly data…There is no legitimate physical explanation would would explain such a regular trend in temp bias – other than UHI, which has opposite polarity’
In Case You Missed It:  Study may explain left-wing lunacy in big cities: Rise in air pollution leads to severe mental illness
Posted in Freedoms.

Obama Links All Christains to Crusades; Denies any Terror Link to Islam

(Conservativepapers) They’re burning and beheading victims in the name of Islam, the terrorist themselves say Islam is their motivation and...