(Conservativepapers) They’re burning and beheading victims in the name of Islam, the terrorist 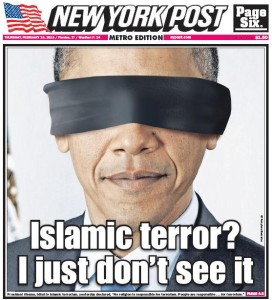 themselves say Islam is their motivation and often quotes the verses to justify their heinous acts.  President Obama delivered a major speech Wednesday on combating “violent extremism” (sic), while refusing yet again to use the words “Muslim terrorists”, or “Islamic terrorism”

Funny because just last week he linked every Christian with the Crusades,  Barack Obama warned Christians not to get on a “high horse” when it comes to religious extremism, saying, “remember that during the Crusades and the Inquisition people committed terrible deeds in the name of Christ.” Ironically the Crusades were  a response to Muslim aggression.

So lets get this strait Christianity and every Christian is linked to the Crusades, but according to Obama Islam has absolutely no link to Islamic terrorism.

Fox News’ Harris Faulkner asked Friday why Obama is willing to talk about the “Christian Crusades” but not utter the words “radical Islam.”

“No one has ever said they weren’t the ‘Christian Crusades,’” Faulkner said. “So why can’t he call this radical Islam?

Andrea Tantaros proceeded to call Obama out for attributing the Spanish Inquisition to Christians, saying that 100 people died, “not by the Church killing them on a witch hunt, but it was the Spanish authorities.” She called the 100 people who died a “normal lunch break” for a group like Boko Haram.

Former U.N. Ambassador John Bolton went so far as to compare the president to Osama bin Laden for his use of the term “Crusades.” He said Obama “validated one of Al Qaeda and Osama bin Laden’s main points” by using the term because “it was Osama bin Laden who called Americans and the west crusaders.”

White House Press Secretary Josh Earnest told reporters that the Obama Administration does not believe it is “accurate” to describe terrorists like the ones who attacked Charlie Hebdo in Paris as “radical Islamists” because they are “individuals who would like to cloak themselves in the veil of a particular religion” and the U.S. does not want to give them the satisfaction.

So what is it  Obama, you suggested that all religions, including Christianity, were open to exploitation, but yet Islam has no link to modern Islam Islamic Terrorism?

In Case You Missed It:  Joe Rogan To CNN Employee: ‘Do You Think That’s A Problem That Your News Network Lies?’ (VIDEO)
Posted in Terrorism, Tyranny and tagged ISIS, Islam, Jihad, Obama, Terrorism.