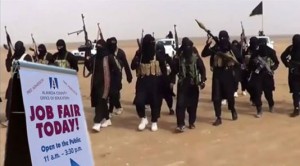 As early- onset dementia continues to confound Barack Obama’s thinking and perspective, the whole of civilized society grows closer and closer to concluding that all out war is the only alternative to being a victim of burning, decapitation, or shooting at the whim of psychotic Islamic purveyors of peace specializing in 7th century philosophy and murder techniques.

Indeed, even in the face of horrific acts of brutality not seen since Nazi Germany under the reign of Adolph Hitler, Barack Obama continues to insist, as he did at the White House conference on terrorism, that America is not at war with Islam.

In Obama’s Islamic-biased, brain-dead state, Islamic terrorists are not really evil, rather they are victims of brutal unemployment and poverty. They, Obama says, need compassion and understanding, instead of boots on the ground and military might of the type America used to be capable of.

In keeping with this anti-American, disjointed, uninspired refusal to accept facts and reality, The One is secretly plotting a scheme that will, in one fell swoop, achieve two of his fondest desires:

Which is: Obama is working on an Executive Order that would release all detainees at GITMO to red states in the US South, and simultaneously convert said site to a Career Planning and Job Placement (CPJP) center focusing on the unmet needs of unemployed Jihad warriors.

This ambitious program will cost US taxpayers, excepting only illegal aliens, $100 billion a year, money that can be easily rounded up by cutting the defense budget, unneeded VA activities, and funds wasted by DHS to protect the US-Mexico border.

After all, as the president stated recently, nothing can stop illegal immigrants who want to invade America, a fact particularly true when the nation is saddled by a president of questionable legal status himself!

Obama’s CPJP would be designed to help the unemployed Jihad assess his/her work skills, use the latest technology to upgrade those skills, and then market those upgraded skills to an anxious world longing to make peace with Islam.

Workshops would be conducted to address the following job search tools:

Resume Preparation: How to hide those unseemly periods between jobs when one is engaged in mass decapitations or burning rather than gainful employment.

Negotiating Wages and Benefits: How to secure the best pay and benefits from Jewish employers…familiarity with knives and IED devices essential.

Future Plans and Goals: How to impress prospective employers with one’s ambition and goals. Example: When asked what one plans to be doing five years from now, avoid answers that suggest that one is working toward a comfy spot in Muslim heaven with 72 virgins…instead say you are anxious to improve yourself to the level of minimum wage food service clerk at an eatery that specifically does not serve pork in any form.

In Case You Missed It:  Most covid deaths now occurring in "fully vaccinated" people
Posted in Freedoms.

Congress Is About to Impose Another Unfunded Mandate On Doctors

Doctors in their day-to-day practice already face a mound of federal regulations. Now, starting Oct. 1, doctors will face a...