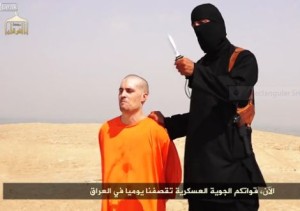 Islamic terrorists are running roughshod over a good quarter of the planet, and our government is incapable of identifying their “mysterious” ideology. However, here at home, we supposedly face a terror threat that is – apparently – both far worse and far easier to labe

A new intelligence assessment, circulated by the Department of Homeland Security this month and reviewed by CNN, focuses on the domestic terror threat from right-wing sovereign citizen extremists and comes as the Obama administration holds a White House conference to focus efforts to fight violent extremism.

Your government believes that these conservative monsters – who have allegedly carried out 24 attacks since 2010 – are just as bad, if not worse, than ISIS.

ISIS, you may remember, has been beheading infants, crucifying children, and slaughtering Christians, Jews, and Muslims by the tens of thousands. …But, forget all of that. It’s small potatoes. Unspecified, unnamed, “groups” say ISIS isn’t as dangerous as right-wingers here at home.

And it seems that they aren’t kidding.

Look. If people in the U.S. are shooting cops, by all means, arrest them and prosecute. End of story. However, if ANY law enforcement official ANYWHERE within the United States honestly feels that the domestic right wing is as dangerous as ISIS, they should be removed from office instantly, because they’ve revealed themselves to be incapable of critical thought.

An official at the Justice Department, which is leading the administration’s counter-radicalization effort, says many of the tactics aimed at thwarting radical Islamic recruitment of young people can also be used to fight anti-government extremist groups.

Considering that the only “tactics” we’ve seen so far involve impotent bombing campaigns and a refusal to put boots on the ground, they’re probably safe. Still, it’s worth wondering if this is the left’s new strategy. Is it so hard for them to admit that radical Islam exists that they’re this desperate to get the focus back on the supposed “evils” of a few right-wing crackpots?

Honestly, I have a hard time knowing where to go with this. We’re currently enduring an administration that is cutting nuclear deals with Iran, is making a half-hearted effort at bombing ISIS, has turned its back on our global allies, and refuses to acknowledge the indisputable fact that Islamists in the Middle East represent a threat to the United States. …And when they’re pressed, they come up with THIS pile of B.S. as “the real threat.”

Perhaps they’re worried that a force as horrific as ISIS will bring back the “rah-rah pro-America” patriotism that existed post 9/11. Maybe they’re concerned that, if the focus is on ISIS as the planet’s greatest threat, they’ll finally have to deal with the undeniable link between radical Islam and pure evil. Both of these things are anathema to the modern left and are damaging to Democrat electoral prospects, so perhaps they’re trying to shift the skeptical eye back to a relatively minor domestic issue that they can use to label all political opponents as “extremists.”

….Or maybe progressives have just decided that it’s time to identify their “real” enemy.

Either way, this report makes it feels like the feds have decided to shift their attention away from their tried and true plan of “burying their heads in the sand” in favor of a more pro-active – if equally wrongheaded – strategy.

Mark my words: The next step in this madness is to equate the Tea Party with the insanity of ISIS ahead of 2016.

In Case You Missed It:  Proof that the Taliban takeover was not Biden's incompetence But TREASON!
Posted in Terrorism, Tyranny and tagged Conservatism, ISIS, lie, Obama, Propaganda, Tea Party, Terrorism, White House.