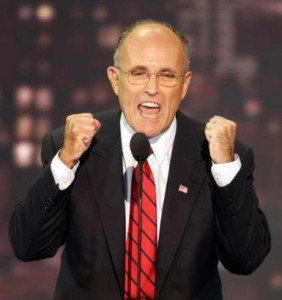 The most telling part of the ‘Obama doesn’t love America’ Rudy Giuliani story is how the mainstream media is coming off so sanctimoniously affronted.

Talking heads in some of the most surprising places (like Megyn of Fox News’ Kelly file, for example) are absolutely affronted that Giuliani put into plain words what millions of Americans are already thinking: “Obama does not love America”.

Given that presidents, are after all, politicians in the first place, there have been good presidents and not so good ones over the years.

But not until Obama was America thrown off the life-providing teat before it could be weaned.

Given the mainstream media’s big effrontery display, how many average Americans must now be wondering: “How is it that so many news media pooh-bahs are affronted by Giuliani’s defense of America, but not affronted that Obama does not love America”?

Are the stars of the present-day American media unaware that Obama so obviously and unabashedly sides with Islamic terrorism, even patently refusing to use the term ‘Islamic terrorism’ and working to scrub all references to the term from the public lexicon?

Can media meisters STILL be in the dark about the open southern border that provides access to all manner of illegal aliens and that Obama won’t think twice about using his pen to sign Executive Amnesty?

Underlining the sad state of our now upside-down world, by daring to bring Obama’s not loving America into the public square,  Giuliani is now getting death threats.

It was at a private dinner for Wisconsin’s Republican Governor Scott Walker, a potential 2016 presidential contender, that Giuliani put into words his concerns that America has a president who does not love it.

Interesting that now, like the proverbial bolt out of the blue, Washington Post editorial staff would ask Walker whether or not he thinks Obama is a Christian during a recent interview.

Even the most unimaginative among us can see where all this is going.

All Republican candidates for president who look like they might have a chance will be media smeared as bigots, bible thumpers and closet racists.

Walker avoided the Post’s trap by replying that he doesn’t know whether or not Obama is a Christian; that he has never had the opportunity to talk to Obama about it.

All we have to go on about Obama’s Christianity is what Obama says about it.  To date, no prominent pastors have jumped up to attest to Obama’s Christianity, and within the past year the only person to identify Obama as a “fellow Christian”  was Roma——, and that was during publicity for the television mini-series, The Bible.

For any of those not affronted still looking for proof, there’s plenty of video evidence that Obama does not love America, not the least of which is the video showing Obama’s 20-year-long pastor, the hate-spewing Jeremiah Wright of Trinity United Church of Christ, where the Obamas were married.  When Wright clearly yelled, “God damn America!”, and made countless other anti-America statements, there are no videos to show Barack Obama jumping up to set his pastor straight.

Does this mean that Obama was just going along to get along, or did he share Jeremiah Wright’s visceral hatred-for-America views?

The mainstream media claiming effrontery to Giuliani’s comments have much in common with Obama’s denial of the reality of Islamic terrorism, in that they are hiding under the cover of effrontery and are in an extreme state of denial about a president who clearly doesn’t love America.

The most perplexing question of them all should be: Why is the mainstream media affronted by Rudy Giuliani telling the truth?

Are they that afraid of Obama,  or merely only in the tank for him?

Why Hong Kong Might Lose Its No. 1 Spot on the Index of Economic Freedom

It’s good to be No. 1. But as any former champ will tell you, you have to avoid becoming complacent...