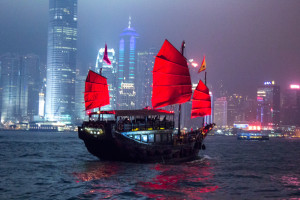 o be No. 1. But as any former champ will tell you, you have to avoid becoming complacent if you want to stay ahead of the pack. First-place finishes aren’t guaranteed, just ask Hong Kong.

Every year since 1995, the Heritage Foundation and The Wall Street Journal have measured the state of economic freedom in the world. We go country by country, poring over the details of who’s up, who’s down, and who’s treading water. Through all the changes we’ve charted, one thing hasn’t changed: Hong Kong takes the top slot.

“As the economic and financial gateway to China, and with an efficient regulatory framework, low and simple taxation, and sophisticated capital markets, the territory continues to offer the most convenient platform for international companies doing business on the mainland,” write the editors of the 2015 Index of Economic Freedom.

To see what Hong Kong does right, consider business licenses. Obtaining one there requires filling out a single form, and the process can be completed in a few hours. In many other countries, it’s more complicated and can take much longer. Bureaucracy, inefficiency and even corruption abound.

But while Hong Kong in many ways continues to act as a fine example for other countries who aspire to be economically free, its foothold on the No. 1 spot is slipping. Singapore, the perennial No. 2 finisher, has seen the gap between it and Hong Kong steadily narrow in recent years. Only two-tenths of a point (on a scale of 1-100) separate its Index score from Hong Kong’s.

In short, they’re virtually tied. And it’s worth noting that Singapore’s Index score is unchanged this year, which means Hong Kong has only itself to blame for coming within a hair’s breadth of losing the top slot. The question is, why?

Yes, Hong Kong, a special administrative region of China’s since 1997, enjoys a large degree of autonomy. It has small government, low taxes and light regulation. But as the Index notes, “economic decision-making has become somewhat more bureaucratic and politicized, and the government’s administrative scope and reach have expanded.”

It wasn’t supposed to. Hong Kong was returned to the mainland by the British as part of a “one country, two systems” set-up designed to preserve its prosperity. But last year, Beijing issued a paper that undermined the “Basic Law” that details this agreement. China’s leaders asserted a “comprehensive jurisdiction” over Hong Kong that would, among other things, give it control over the slate of candidates that Hong Kong citizens could choose from in their next elections in 2017.

In short, the “free elections” there would be free in name only. That prompted the student-led protests that dominated headlines for a while last year, complete with a deplorable crackdown from government officials.

And the top is exactly where Singapore is aiming. Over the last few years, it’s been advancing a series of reforms that have enabled it to become economically freer. Its markets are open, it doesn’t tolerate corruption, it has a strong rule of law, and it keeps tariffs low.

Other nations in the Asia-Pacific region have been making gains in the Index recently. Taiwan (No. 14 globally), South Korea (No. 29) and the Philippines (No. 76), for example, all saw their scores rise in the 2015 edition. The region as a whole continues to boast the largest number of the world’s “free” economies (though it also is home to seven of the 20 least-free).

Hong Kong still has some impressive bragging rights. At the rate it’s going, though, its continued perch atop the Index of Economic Freedom looks far from certain.

Originally appeared in the Washington Times.

By Robert Laurie   Islamic terrorists are running roughshod over a good quarter of the planet, and our government is incapable...