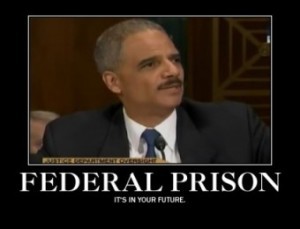 Despite his best efforts to overcome Grand Jury rulings which do not favor “his people,” the soon-to-be-departed Attorney General has decided that the law needs to be changed to make it easier to convict those accused of wrong doing against his people.

This in wake of recent news that Holder’s Justice Department will not pursue federal criminal civil rights charges against George Zimmerman in the 2012 shooting death of black teenager Trayvon Martin, and indications that Holder’s vendetta against white police officer Darren Wilson in the shooting death of Michael Brown last August would likewise be for naught.

Given these embarrassing failures, one would expect a professional of Holder’s stature to come down hard against the “rush to judgment” practiced by some race agitators, including Barack Obama, Al Sharpton, and Jesse Jackson, until the facts are fully known and understood.

Operating on the premise that any and all alleged abuses of African-Americans are driven by anti-black racism is un-American, unfair and a jarring rebuttal to Martin Luther King’s “I Have a Dream” standard.

Rather than fanning the flames of unrest with foolish statements before the facts are known, black leaders should be encouraged to withhold premature judgement and give “justice” a chance.

That is what an objective, professional would do….which explains why Holder is instead seeking to lower the bar!

In Case You Missed It:  USA / NATO gearing up for counterattack against Russian forces in July or August, with high risk of escalated retaliatory strikes by Russia using EMP or nuclear weapons
Posted in Freedoms.

John Boehner, Speaker of the United States House of Representatives, on Thursday challenged an assertion by the Obama administration that...