Barack Hussein Obama took a stab at Israeli Prime Minister Benjamin Netanyahu in an interview with Reuters on Monday, on the eve of Netanyahu’s controversial speech to a special joint session of Congress on Tuesday morning. Obama said that Netanyahu “made all sorts of claims” about the interim nuclear deal with Iran that turned out to be untrue. Yet Obama mischaracterized Netanyahu’s remarks, and misrepresented Iranian compliance with the terms of the interim deal. 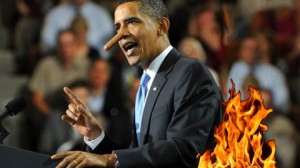 Obama’s full comment on Monday was: “Netanyahu made all sorts of claims. This was going to be a terrible deal. This was going to result in Iran getting 50 billion dollars worth of relief. Iran would not abide by the agreement. None of that has come true. It has turned out that in fact, during this period we’ve seen Iran not advance its program. In many ways, it’s rolled back elements of its program.”

However, each element of that claim is untrue–and some are outright lies.

The deal is a “terrible” deal, by the standards of the international community when Obama came to office, when the UN Security Council had banned any nuclear enrichment at all by Iran.

Furthermore, Netanyahu did not say that Iran would receive “50 billion dollars worth of relief.”

Obama seems to be misquoting an Israeli claim that sanctions relief would be $20 billion rather than the $7 billion the Obama administration promised. The Israelis were laterproven to be correct.

Obama is also wrong when he claims Iran has abided by the agreement. It has violated that agreement in at least five ways–and one of those violations was so serious that the U.S. actually complained to the UN Security Council.

In Case You Missed It:  The Second Amendment is the Inalienable Right from which All Other Rights Are Guaranteed
Posted in Israel, Tyranny and tagged Iran, Israel, lie, Netanyahu, Nuclear Weapons, Obama.

Who Has the Last Word When It Comes to Redistricting?

The Supreme Court heard a vigorous debate today over who ultimately has the constitutional authority to determine where the boundary...