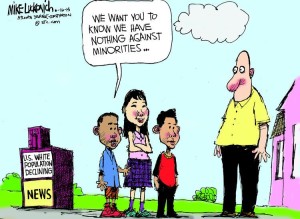 This is the result of an ongoing trend of declining birth among white Americans and a baby boom among immigrant groups, as well as a surge in immigration.

By the year 2020, 50.2percent of all children in the US are expected to be non-white, according to the Census. By 2044, whites will be outnumbered by minorities.

The Census study, released this week, predicts that by year 2060, nearly 20percent of the population will be foreign born – thanks to an influx of 64million new immigrants.

The number of people who identified themselves as only black will also decline about 8percent to about 59million.

The number of Asian-Americans will also increase dramatically – even more than the Hispanic population – rising 128percent to 22million.

The Census reporty also projects a massive surge in the portion of the population that’s over age 65. By 2030, 20percent of that population will qualify for a senior discount.

In 2033, there will be more Americans over age 65 than children – thanks to the aging Baby Boom generation.

Demographers estimate that by 2060, the population of the United States will increase by 98million – from 319million to 417million people.

Even so, the overall population growth of the nation will slow considerably over the next 40 years – as immigrants and the children of immigrants reach higher incomes, their fertility rates will drop – like native-born whites have.

“Whites” have always been a WORLD minority. Now they’re becoming minorities in the only countries where they used to be a majority. Doesn’t that mean that we are, indeed, slated to lose all of our ethnic identity and culture? Will Japan, Africa and China also lose their ethnic homogeneity? You would think that diversity would be promoted in those countries, who have ethnic majorities in the big picture, over the few countries where “white” people live as a majority.

If all the population projections are true, white people will have very little control over their own fates in the coming centuries. If we’re lucky, we’ll be handed a small plot of land to fight over constantly like the Jews.

In Case You Missed It:  “We Do Not Have Different Rules For Democrats or Republicans” – Merrick Garland Pushes Back on Claims Biden Has Been Treated Better Than Trump (VIDEO)
Posted in Freedoms and tagged Immigration, United Socialist States of America, US Citizen, White Minority.

On June 20, 2007, Hillary Clinton complained about Bush officials shredding the US Constitution by having secret email accounts. [youtube...