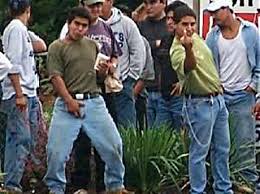 Among the more exasperating realities of the illegal alien mess is the incredibly stupid insistence by Republicans that Democrats accede to securing the US-Mexico border!

Republicans generally given the benefit of the doubt with regard to intelligence and patriotism, luminaries such as Jeb Bush and John Boehner, are nothing but brain-dead fools if they really believe that Democrats will ever agree to cutting off the flow of illegal aliens from south of our borders!

Fact is, Barack Obama’s promise (threat?) to fundamentally transform America is based on the notion that tens of millions of non-English speaking, unskilled, 3rd-world foreign peasants can be lured into the US with promises of welfare, food stamps, health care, education, and other booty paid for by US taxpayers.

Once here, illegals will be converted via fast-track to US citizens, and made to vote straight Democrat for decades to come!

That and providing unlimited slave labor for greedy Republican billionaires are the motivations behind amnesty, immigration reform, and open borders!

Democrats understand that importing illegals is the way to secure the vote for Marxist policies. The impact on American homeland security, language, culture, education, economic, political, and social well-being matters not at all to Democrats, driven as they are by the insatiable lust for absolute, unabridged power!

Democrats know that the unrestricted flow of illegals into America will destroy the two-party system, a fact that is apparently beyond the reasoning ability of Jeb Bush, Paul Ryan, and scores of other deluded RINOs now polluting the ranks of the Republican Party.

Given the fact that the Obama administration is actively pursing a pact with Iran that, if executed, will facilitate the nuclear arming of the terrorist state and all but guarantee the annihilation of Israel, it should be obvious that converting America into a third-world cesspool akin to Mexico is well within the lunacy powers of Barack Obama and the Democrat Party!

Besides, Obama and his racist brethren and sisters are most anxious to replace the control that Caucasians have exerted over the rule of law and American culture for more than 235 years with the values and traditions of impoverished people of color from the 3rd world.

Secure the borders? And dismantle the cash and voter cows?

The BBC’s Sima Kotecha: Islam is ‘a religion of peace’

By Paul Austin Murphy The BBC really should try harder. Think about it. The BBC uses an Islamophile journalist (who...