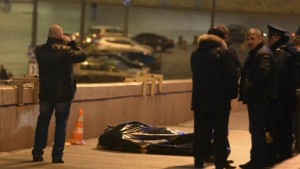 Russia’s former deputy Prime Minister, was shot in the back four times on a bridge in the shadow of the Kremlin on 27 February as he walked home from dinner with his girlfriend.

Prosecutors have charged two Muslim men, Zaur Dadayev and Anzor Gubashev, with involvement and are holding three other Muslims as suspects.

There was reportedly a sixth suspect who blew himself up with a grenade as police attempted to seize him in Grozny, Chechnya, on Saturday night.

The western mainstream media just hours after Nemtsov murder miraculously from thousands of miles away they solved the crime and quickly convicted Russian President Vladimir Putin.

But was it Putin? Expect the media to stop reporting on his murder, why because it is now looking to be that an Islamic extremist killed Boris Nemtsov. You know that very peaceful religion that has a few here and there that interpret the Islamic verses in their religious books incorrectly.

A Chechen Muslim named Zaur Dadaev, has confessed involvement in Nemtsov’s murder, said he organized the crime in revenge for the Nemtsov’s  “negative comments on Muslims and Islam.”

Oh no stop the press, the mainstream cannot report another Muslim murder upset over some infidel speaking negative of Islam, after all just last week there was an attempted terrorist attack in Florida but you would have not known it. A Devout Muslim woman attempted to drive her vehicle through the airport entrance, crashed her car into a Miami-Dade Police patrol car and screamed at officers in Arabic and then, in English — all before falsely claiming she had a bomb,

This is why I expect the Nemtsov story to die, it no longer fit the mainstream narrative for Propaganda against Putin and exposes yet another terrorist attack in the name of the self proclaimed religion of peace better known as Islam.

Following the Charlie Hebdo attack in Paris, Nemtsov wrote in his blog that the world was witnessing a “medieval Islamic inquisition.” Apparently this was too much for Dadaev and “offended” him so he had him killed.

In January 2015, the Muslim terrorist “learnt that Boris Nemtsov more than once allowed himself negative comments on Muslims living in Russia, prophet Mohammed and Islam,”according to the news agency.

“As a matter of fact, Dadaev acknowledged having organized the killing of Nemtsov .”

The president of the Chechen Republic, Ramzan Kadyrov, said: “Everyone who knows Zaur says that he is a profoundly religious man and that he, as all Muslims, was shocked by what Charlie did and by comments in support of the cartoons,” Kadyrov wrote this on Instagram.

“There are reports that Nemtsov received threats due to his position over the shooting of Charlie Hebdo staff in Paris,” Vladimir Markin, spokesman for the Russian Investigative Committee, said in February.

Other possible reasons for Nemtsov’s murder, according to investigators could range from a political provocation to his business activity or personal life.

In Case You Missed It:  Get Ready for the Economic Collapse
Posted in Terrorism and tagged Chechnya, Eastern Europe, Islam, media, murder, Russia, Terrorism.

Berlin Is Alarmed by Aggressive NATO Stance on Ukraine

Germans are alarmed Washington hawks are intent on wrecking a diplomatic solution to Ukraine crisis favored by Berlin This article...