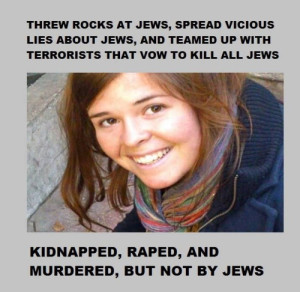 Kayla Mueller, the supposed humanitarian aid worker who was captured by ISIS. They claim that she was killed in a Jordanian airstrike. The Jordanian military authorities say that the building they bombed was an ISIS weapons storage facility, and hence a legitimate target. In any case, the blame rests with ISIS, who kidnapped her and put her in harm’s way.

Her family and friends, the New York Times reported, described her as “a deeply idealistic young woman eager to help those less fortunate.” President Obama sent condolences to the family, and at an emotional statement made on the Senate Floor, John McCain mourned the loss of a young woman who was a native of Prescott, Arizona:

After graduating from Northern Arizona University in Flagstaff in 2009, Kayla committed her life to helping people in need around the world – first in India, then Israel and the Palestinian territories and back home in Prescott, where she volunteered at an HIV/AIDS clinic and a women’s shelter. (my emphasis)

William Turnbull, a 66 year-old Vietnam veteran who lives nearby, told the Times:

[Kayla Mueller] represented everything good about being an American. In the outgoing battle between good and evil, she represented the best of the good. She took great risk to help other people.

Our nation’s commander-in-chief  said much the same. She represented, he said, “the best of America.” President Obama described her in these glowing terms:

Kayla dedicated her life to helping others in need at home and around the world. In Prescott, Arizona, she volunteered at a women’s shelter and worked at an HIV/AIDS clinic. She worked with humanitarian organizations in India, Israel, and the Palestinian territories, compelled by her desire to serve others. Eventually, her path took her to Turkey, where she helped provide comfort and support to Syrian refugees forced to flee their homes during the war. Kayla’s compassion and dedication to assisting those in need shows us that even amongst unconscionable evil, the essential decency of humanity can live on.

We must, of course, mourn the loss of any American who, for whatever reason, finds himself or herself a captive of ISIS. In this case, Kayla Mueller was leaving Syria and was abducted as she was boarding a bus with a man she knew, possibly a boyfriend or colleague. When Mueller had first arrived at the Doctors Without Borders office in Aleppo, their staff was “flabbergasted” since, according to the New York Times report, she was in a “no-go zone for most international aid workers.”

The problem with the tributes, especially that made by President Obama, is that Mueller was not a simple human rights worker. Nor was she, as Mr. Turnbull said, “the best of the good.”

The truth is that Kayla worked in Israel and the Palestinian territories with the International Solidarity Movement, the same group that the late Rachel Corrie was part of.

The ISM placed Corrie in a dangerous situation, and falsely told the world that Israel’s IDF had purposefully killed her in order to scare off foreigners coming to aid the Palestinian people.

The ISM, as anyone can easily find out, supports Israel’s enemies, including Hamas, Hezbollah, and those in the Palestinian Authority who work for Israel’s destruction.

Like Corrie, Ms. Mueller’s work in the Middle East was not that of a humanitarian and non-partisan aid person, but rather, as the ISM statement put it, she “worked with Palestinians nonviolently resisting the confiscation and demolitions of their homes and lands.” She bragged in her internet posts of working in anti-Israel demonstrations in East Jerusalem, in an area which an Israeli court decision recognized as one in which Israelis had a legal right to build homes in. She also supported the throwing of rocks by Palestinians at Israelis, viewing that as a just tactic of the oppressed.

She bought into the narrative that the Israelis were the oppressors and the Palestinians and others who opposed them, the heroes. These are her own words in a post of Oct. 29, 2010:

Those words are not that of a humanitarian aid worker, but of a propagandist for the supporters of worldwide jihad who seek Israel’s destruction.

So, as Israeli writer and activist against the ISM Lee Kaplan accurately writes:

This is another Rachel Corrie propaganda story in the making, and the western media is falling for it again, or embracing it on purpose.

Thus Ms. Mueller died not only at the hands of ISIS, but by her own work in the region on behalf of a terrorist support group that regularly put her in harm’s way.

Her work was on behalf of the supporters of Hamas, and it is not surprising to find that she wrote propaganda against Israel on the ISM’s website. To her, throwing rocks at Israelis was a “nonviolent” act, and like Rachel Corrie, Kayla also slept in front of homes that were to be demolished and waited “for the one night when the bulldozers come to finish them off.”

One of her letters claimed that the IDF used phosphorous along with tear gas that poisoned one woman’s lungs, a victim who shortly died at home from asphyxiation. That the IDF does not use phosphorous is simply a fact that did not get in the way of her hateful propaganda. She somehow also failed to mention that the IDF destroyed homes that either were munitions storage facilities or in which a known terrorist who had been involved in specific acts against Israel lived.

The tragedy of Kayla Mueller’s life is that out of an idealistic urge to do good, she went to work on behalf of supporters of terrorism and violence who believe openly in a revolutionary route to salvation. Like so many others, back in the United States she fell prey to the overtures of leftist revolutionaries, who are adept at using the aims of young and innocent students who yearn only to build a better world.

In taking that path, she died on behalf of those who believe in violence and world-wide revolution, beginning with the destruction of Israel.

What Really Happened to Rachel Corrie

by JOEL B. POLLAK Democrats and the mainstream media have used the words “traitor” and “treason” to describe a letter...