Turkey considered to be a “moderate” Islamic country by western powers, well is about as Moderate as one would expect from Islam. 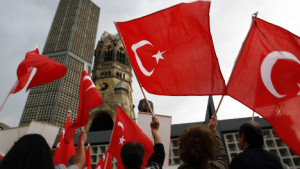 While the websites of atheist, the French satirical newspaper Charlie Hebdo and a Kurdish separatist organization are blocked to Turkish Internet users b the government. Sites that promote extreme Islamist messages — even some that are outright sympathetic to the Islamic State (ISIS), the militant organization that has marauded through Iraq and Syria are allowed by Turkey’s censors.

A hallmark of the decade-long leadership of Turkey’s president, Recep Tayyip Erdogan, and his Islamist Justice and Development Party, or A.K.P., has been a crackdown on freedom of expression. Yet what Turkey chooses to censor reflects the Islamist values of the government, critics say. With the rise of the Islamic State, also known as ISIS or ISIL, this dynamic has been set in sharp relief, highlighting the deep divide between Turkey and its Western allies in the fight against the militants.

The contradictions are often striking, as Turkey largely maintains a hands-off approach to extremist Islamist expression while widely cracking down on other speech. Last year, for instance, Twitter fielded more requests from Turkey to remove material than from any other country. And lately, a beauty queen, a top newspaper editor, an actor, a teenage boy and dozens of others have been targeted by prosecutors for insulting Mr. Erdogan.

At the same time, one prominent site, Takva Haber, a widely used forum for recruiting Turks to the Islamic State, operates freely. It is also a popular news site for jihadists, and it recently offered tips to fighters in Iraq and Syria about how to avoid being spotted by drones from the American-led coalition carrying out an air campaign against the militants.

“It sparked curiosity in me and guided me to the forums where people provide information about the recruitment process and logistics,” said Can, a 27-year-old from Ankara, the capital, who had joined the Islamic State and then defected, speaking on condition that he be identified only by his middle name, out of fear of reprisals.

“The ISIS Internet community in Turkey is big and has a big following,” he said. “That’s how everyone comes together and communicates. If we all met on the street, people would notice.”

American officials have sharply criticized Turkey for doing little to aid the fight against the Islamic State, denying coalition planes an air base for strikes in Syria and Iraq and standing by while the militants attacked the Syrian Kurdish town of Kobani. American diplomats say the reluctance is attributable in part to the government’s dependence in this Sunni nation on a deep well of religious conservatism that bridles at assisting in attacks against a Sunni group, even one as brutal as the Islamic State.

But allowing militant websites to flourish is problematic, analysts say, alienating allies and, at worst, opening the government to accusations of tacitly collaborating with the militants.

“Leaving the ISIS propaganda to flourish is equivalent to endorsement,” said David L. Phillips, the director of the Program on Peace-building and Human Rights at Columbia University and a former State Department official who has researched Turkey’s policy on the Islamic State.

Turkey’s reluctance to crack down on militant websites also reflects the government’s view that the primary enemy in Syria is the government of President Bashar al-Assad, not the Islamic State. Turkey has also opposed efforts by Kurds within Syria to secure an autonomous region, fearing it would embolden Turkey’s restive Kurdish minority.

“They continue to be more concerned with Assad and Kurdish separatism than they are about ISIS,” said Richard N. Haass, the president of the Council on Foreign Relations. Mr. Haass said Turkey’s reluctance to go after Islamic State-related websites is consistent with a “domestic tolerance” within Turkey toward the group.

The government’s priorities in the arena of censorship are protecting “the reputation of political figures” and religious defamation cases, such as the decision to block the Charlie Hebdo website, said Yaman Akdeniz, a cyberlaw expert and professor at Istanbul’s Bilgi University who is advising the legal teams defending the beauty queen and the atheist association.

“The censorship is in line with government sensitivities and matters that make them uncomfortable,” he said.

A senior government official, speaking anonymously as a matter of protocol, refused to address the issue of what is censored and what is not, at least not directly. “The regulation of the Internet is a very technical matter that involves many different factors, from citizen complaints to court orders,” he said. “The government doesn’t sit around a big table and make decisions on what should and shouldn’t be blocked.”

Susan Corke, the director of Eurasia programs at Freedom House, an advocacy group that promotes freedom of expression, said that the government’s censorship priorities were quite evident. “Apparently,” she wrote in an email, “that means blocking sites it deems offensive like those promoting atheism, but being tolerant of radical Islamist sites like Takva Haber.”

In addition to Takva Haber and countless Twitter accounts that promote the Islamic State, there is the work of Ebu Hanzala, a Turkish Salafist cleric who is sometimes called the “spiritual leader” of the militant group within Turkey. He has been arrested several times over the years — once on suspicion of planning attacks on synagogues in Istanbul, other times in raids targeting Al Qaeda — but he is free today, and his online magazine promotes Shariah law. While he does not explicitly promote the Islamic State, his teachings have helped inspire recruits.

Speaking in New York last week at the Council on Foreign Relations, Prime Minister Ahmet Davutoglu was asked by Mr. Haass about what appeared to be the contradiction of his participation in a march in Paris after the attack in January on Charlie Hebdo’s offices and Turkey’s record of censorship.

Mr. Davutoglu said, “Freedom of speech, that does not mean freedom of insult.”

Asked who decides what expression to censor and what to allow, Mr. Davutoglu said, “The social values decides.”

Turkey was no paragon of free speech under its old secular and nationalist system, although, then, the frequent offense was to insult notions of “Turkishness.” Now the government focuses on speech it deems insulting to Islam or the president, or that promotes atheism.

“Social values in Turkey today are Islamist values,” Mr. Phillips said. “The A.K.P. sees itself as the enforcer of Turkey’s values.”

By Michael Snyder, Can you imagine going to work each day knowing that there are lots of people out there...