Domenico Dolce and Stefano Gabbana, founders of the eponymous fashion house Dolce-Gabbana, have come out strongly against gay marriage, the notion of gay families, and the use of surrogacy to procreate. 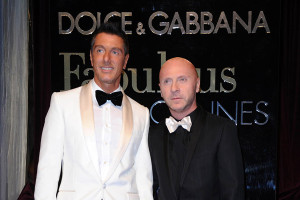 The billionaire pair, who used to be romantically linked, gave an interview with the Italian magazine Panorama, in which they said, “The only family is the traditional one. No chemical offspring and rented uterus. Life has a natural flow; there are things that cannot be changed.”

They also said, “Procreation must be an act of love.”

Gabanna said, “The family is not a fad. In it there is a supernatural sense of belonging.”

The pair have long been outspoken about gay marriage. In 2013, when the LondonTelegraph asked them if they had ever considered getting married, they answered, “What? Never!” Dolce said, “I’m a practicing Catholic.”

Gabbana told the Daily Mail in 2006, “I am opposed to the idea of a child growing up with two gay parents.”

LGBTNews in Italy is already calling for a boycott of Dolce and Gabbana.

It is not unusual for gay men in Europe to oppose gay marriage. In fact, a group of gay men in France, calling themselves Les Hommen, have been an ongoing feature of traditional marriage protests in France. Les Hommen invaded the French Open, stripped to the waist, with pro-marriage slogans written on their chests. Gay Star News suggested it was “the most homoerotic anti-gay protest ever.”