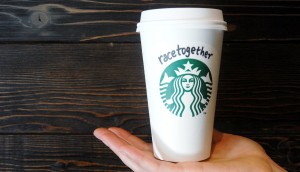 As a deeply involved patron of political talk-radio, my day usually begins and ends with a swig, or so, from the smoldering cup of racial chitchat.

When my eyes finally close for a well-deserved respite, the topic of race relations is purged from my awareness by the grace of God.

Upon waking, like millions of other caffeine addicted Americans, my first dire need of the new day is to feed the coffee monster that dwells within my soul.

At this point, the furthest thing from my mind is racial relations! To hell with concerns about discrimination, racial bias, Ferguson, and all the best.

I need a respectable slug of caffeine in my system before anything more complicated or controversial than the basketball brackets can be discussed, debated, considered, or even mentioned.

Imagine my astonishment, then, upon learning that Starbucks management has instructed coffee baristas in its employ to engage me in “race together” talk!

Good heavens, Mr. Schultz, you would be well-advised to stick to pushing overpriced, bitter Lattes on the public, and leave race talk to Rush Limbaugh, Glen Beck and other conservative luminaries who earn millions because listeners actually want to hear their take on the hot issues of the day!

Mind you, most of the Starbucks baristas that I have encountered seem to be decent, intelligent beings, expert in Latte and Chocolate Croissant delights. None have impressed me as being possessed of the knowledge or temperament needed to host civil, non-violent conversation about the most controversial topic in American history!

You are well aware of the fact that the United States fought a great civil war in the 1860s over the issue that you want your baristas to deliberately bring up to your loyal clients, right?

In that war, an estimated 800,000 American lives were lost on the battle field—all because some damn fool thought we needed to discuss race relations!

Are you willing, Mr. Schultz, to be remembered in history as the coffee entrepreneur who provoked the start of the 2nd US civil war?

Please, just keep the coffee hot and croissants fresh and tell your baristas to keep their mouths shut about race relations!

Iran Can Already Strike at Tel Aviv? What a Nuclear Attack Would Look Like

What would a nuclear attack on Tel Aviv look like? According to a model presented by Dr. Moti Ofek, such...