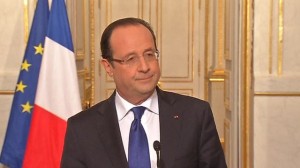 “For me, Vladimir Putin is first of all the president of Russia,” Hollande stressed, commenting on his relations with the Russian leader. “When I talk to him, I talk to Russia, and this is the country that I respect, a great country, a friendly country,” he said.

Hollande admitted there are some disagreements between Moscow and Paris. “President Putin has his own interests, own vision, his own methods and things he says are not always commonly accepted,” the French leader noted. “That is why I decided to talk openly with the head of state who is always speaking directly,” he added.

Talking about the Ukrainian crisis, Hollande said that he sees the resolution in the full implementation of the Minsk accords. “It would not be in Russia’s interests if Ukraine is devoured by the North Atlantic Alliance because in such a situation, [Russia] will find itself in a direct contact with those whom it considers a threat,” he said. “It is also not in line with France’s position,” Hollande said.

Simultaneously, a meeting of the Contact Group on Ukrainian settlement was held in Minsk, bringing together former Ukrainian President Leonid Kuchma and Kiev’s special representative for humanitarian issues Viktor Medvedchuk, both representing the Ukrainian side, alongside representatives of the self-proclaimed Donetsk and Luhansk People’s Republics (DPR and LPR), Denis Pushilin and Vladislav Deinego, the Organization for Security and Cooperation in Europe’s (OSCE) special envoy to Ukraine, Heidi Tagliavini, and Russia’s ambassador to Ukraine, Mikhail Zurabov, who acts as a mediator.

Day after Obama urges Iran to seize ‘historic opportunity,’ supreme leader says US seeks to create insecurity BY TIMES OF...