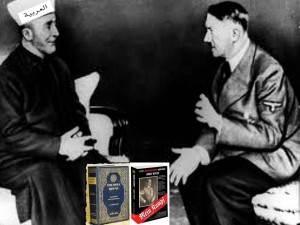 In exile in Argentina, the world’s most wanted man was writing a defense of the indefensible.

He rejected “so-called Western culture” whose bible “expressly established that everything sacred came from the Jews.” Instead he looked to the “large circle of friends, many millions of people” whose good opinion of his crimes he wanted.

These millions of people were not in Germany. They weren’t even in Argentina.

His fellow Nazis had abandoned him after deciding that the murder of millions of Jews was indefensible and had to be denied instead of defended. But he did not want to be denied. He wanted to be admired.

“You 360 million Mohammedans to whom I have had a strong inner connection since the days of my association with your Grand Mufti of Jerusalem,” Adolf Eichmann, the architect of the Holocaust wrote. “You, who have a greater truth in the surahs of your Koran, I call upon you to pass judgment on me.”

“not come until the Muslims fight the Jews and kill them. When a Jew hides behind a rock or a tree, it will say, ‘O Muslim, O servant of Allah! There is a Jew behind me, come and kill him!’”

There was Eichmann’s Hadith Holocaust with even the rocks and trees finding Jews for the Islamic SS.

A more literal judgment came Eichmann’s way five years later in Jerusalem when Israeli agents used extraordinary rendition to seize him and bring him to trial. But the Muslim world had issued its own verdict long ago when the Mufti of Jerusalem had come to Europe urging the extermination of the Jews.

“This is your best opportunity to get rid of this dirty race… Kill the Jews,” the Mufti had ranted to fellow Muslims.

On the 70th year of the liberation of Auschwitz, the ghosts of Eichmann and the Mufti of Jerusalem, who had visited its gas chambers while the Holocaust was underway, still linger there.

A Holocaust survivor in Auschwitz recalled being told that the Mufti’s arrival was a working visit.

“When we have won the war he will return to Palestine to build gas chambers and kill the Jews who are living over there,” an SS officer told him.

Eichmann’s Nazis lost, but the Mufti’s Islamists continue their genocidal agenda. Mein Kampf may be banned in Germany, but it’s a bestseller in the Muslim world.

The edition is often the translation of Louis Heiden aka Luis al-Haj, a Nazi convert to Islam whose introduction proclaims, “National Socialism did not die with the death of its herald. Rather, its seeds multiplied under each star.” The reference was meant literarily. The old Egyptian flag had carried a crescent and three stars on a green field. The new flag of the Arab Republic had two green stars.

Haj worked under Johann von Leers aka Omar Amin, another Muslim convert in the Nazi Ministry of Propaganda, who praised the persecution of the Jews under Islam as “an eternal service to the world”.

An earlier edition had been published by the brother of future dictator, Gamal Abdel Nasser.

In two years in Egypt, Mein Kampf had sold 911,000 copies, an extraordinary accomplishment in a country with a working age population of 13 million suggesting that as many as one in fourteen adults might have bought a copy. By American equivalent bestseller standards it had outsold the Da Vinci Code.

During those same years the vast majority of Egyptian Jews had been ethnically cleansed by Nasser.

At the beginning of the decade, Muslim Brotherhood godfather Sayyid Qutb had written his own Mein Kampf titled, “Our Struggle against the Jews” in which he claimed that Allah had sent Hitler. The claim has more recently been repeated by the Muslim Brotherhood’s Yusuf al-Qaradawi on Al Jazeera in ’09.

“The last punishment was carried out by Hitler… Allah willing, the next time will be at the hand of the believers,” he said.

Today everyone agrees that the Nazis were evil. By the fifties, even Eichmann’s fellow Nazis were looking to jettison the Holocaust and improve their brand. But the Nazis back then were often treated the way that Muslims are today.

Media coverage emphasized distinctions between the radical and moderate Nazis. (Hitler was, of course, a moderate.) Nazi grievances were treated as legitimate. Their crimes were lied about and covered up.

In 1933, the Associated Press’ wire report claimed that the persecution of Jews had already ended. Another wire story headlined “Jew Persecution Over Says Envoy” cited Secretary of State Hull’s relief that the Hitler regime was doing its best to curb further persecution of the Jews.

Hull would later apologize when the Republican Mayor of New York City referred to the Fuhrer as a “man without honor”. Mayor LaGuardia might have been suffering from Fuhrerphobia.

Jewish protests were treated as shrill and baseless alarmism. “U.S. Investigation Shows No Cause for Protest,” the AP headlined its coverage.

“Notwithstanding assurances given by German government leaders and by Hull that the Nazi excesses against the Jewish race had ceased in Germany, Jewish leaders went ahead with plans for mass protest meetings,” another wire story read. “All requests that these meetings be canceled fell on deaf ears.”

A week before the story, the first official Nazi concentration camp of Dachau had opened.

The media coverage should sound familiar. It’s how Iran’s nuclear buildup is being covered. It’s how Muslim violence against Jews is covered. It’s discussed reluctantly and immediately dismissed. Jews are written off as pests who refuse to listen when Kerry, like Hull, tells them there’s nothing to worry about.

That is how the Holocaust really happened.

Auschwitz just shows us the final stage. It doesn’t show us the sympathy for the Nazis, the willingness of some on the left to see them as allies in overturning the existing system and the anger at the selfishness of the Jews in putting their own desire not to be killed ahead of world peace.

It was easier to appease the Nazis. It is easier to appease the Muslim world. The Jews were not seen as a canary in the coalmine; instead, like the Czechs and then the Poles and then everyone else, they were an obstacle to making a deal with the devil. Today it’s the Nigerian Christians, the Burmese Buddhists and a long list of others around the world including the Jews of Israel who stand in the way of peace.

The ghosts of Auschwitz are still haunting Sudan, Nigeria, Pakistan, Gaza, Iraq, Iran and a hundred other places. The victims are Christians, Jews, Hindus, Buddhists, Yazidis and numberless others. The Nazis began with the Jews. The Muslim saying is, “First the Saturday people, then the Sunday people.”

Eichmann found support for Auschwitz in the “surahs of your Koran.” So did the Jihadis who murdered Jews in Paris. If we forget that, then we forget the real lesson of Auschwitz.

How do we know the Nazis used gas chambers to kill Jews en masse? The same way we prove the Holocaust in general–a convergence of evidence from various sources:

1. Written documents–Orders for Zyklon-B gas, blueprints and orders for building materials for the crematoria, etc.

3. Photographs–Not only of the camps, but especially interesting are the secret photos taken of the burning of bodies that were smuggled out of Auschwitz.

4. The camps themselves–forensic tests have now been conducted demonstrating the homicidal use of both the gas chambers and the crematoria for the express purpose of exterminating large numbers of prisoners (Pressac, 1989; Pressac and Van Pelt, 1994).

Once these historical data have been linked together the burden of proof is on the revisionists to disentangle them, both individually and as a whole.

In Case You Missed It:  Demolition of supply chains is pre-civil war SABOTAGE to shape the battlefield for domestic WARFARE against We the People
Posted in Freedoms and tagged Anti-Semitism, Islam, Jews, Muslims, Nazism, Palestine.

US has 4th Largest Number of ISIS Supporters on Twitter…

The Independent has compiled some statistics on where ISIS supporters are tweeting from. Saudi Arabia ranks first with the most...