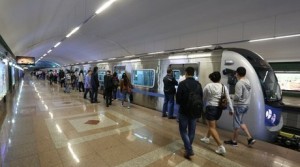 Islamic State (IS) muslim militants returning to the UK could attack London Underground trains or football matches with chlorine gas, a chemical weapons expert has said.

Hamish de Bretton-Gordon, a retired head of chemical and biological weapons for the British Army and NATO, addressed the possibility of such a scenario on 2paragraphs in an article titled, Could ISIS Replicate Tokyo Chemical Attack In New York or London Subway?

“It is very evident that Isis are putting much time and effort into training its jihadis in the use of chlorine as a terror weapon and in particular in IEDs (improvised explosive devices),” said Bretton-Gordon.

“Virtually every foreign jihadi who returns to the US or UK will have been exposed to training of this sort and will have a reasonable idea on how to use chlorine and other toxic chemicals as a terror weapon.”

According to Bretton-Gordon, up to 90 tons of chlorine gas can be purchased in the UK without requiring any license.

Bretton-Gordon also offered tips on how best to survive a chlorine gas attack.

“Avoid the yellow and green cloud, run away and get to high ground, and in extremis, do as they did in WWI, urinate into a cloth and breath through it….your urea very effectively traps the chlorine.”

Bretton-Gordon has previously advised security forces in Baghdad and given civilians in Syria the basic know-how to avoid chlorine.

Upon returning from Baghdad last week, in a chilling alert Bretton-Gordon told the Mirror that a chlorine gas attack was “highly likely” in the UK.

“This could happen on a train or tube or even at a big football match. Islamic State are all over these chemical weapons,” said Bretton-Gordon.

He stressed that, “the last two weeks in Syria and Iraq have seen the most concentrated and deadly use of chemical weapons,” since the 1980s Iran-Iraq war.

The Germanwings tragedy in which 144 people are feared killed happened freakishly close to another French Alps air disaster, more...