“It is hypocritical that some leaks will land you in jail, while others just lead to a slap on the wrist”

When it comes to classified information, some leaks are more equal than others. If you are a whistleblower like Edward Snowden, who tells the press about illegal, immoral or embarrassing government actions, you will face jail time. But it’s often another story for US government officials leaking information for their own political benefit. 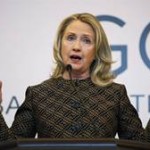 Two stories this week perfectly illustrate this hypocrisy and how, despite their unprecedented crackdown on sources and whistleblowers, the Obama administration – like every administration before it – loves to use leaks, if and when it suits them.

Consider a government leak that ran in the New York Times on Monday. The article was about 300 of Hillary Clinton’s now notorious State Department emails, which had been hidden away on her private server for years and were turned over to Congress as part of the never-ending Benghazi investigation. “Four senior government officials” described the content of her emails to New York Timesjournalists in minute detail “on the condition of anonymity because they did not want to jeopardize their access to secret information”.

Surely the Obama administration will promptly root out and prosecute those leakers, right? After all, the emails haven’t gone through a security review and the chances of them discussing classified information are extremely high. (Even if they don’t, the Espionage Act doesn’t require the information to be classified anyways, only that information leaked be “related to national defense”.) But those emails supposedly clear Clinton of any wrongdoing in the Benghazi affair, which likely makes the leak in the administration’s interest.

But that disclosure was nothing compared to what appeared in the Wall Street Journal a day later, in the wake of Israel’s Prime Minister Benjamin Netanyahu’s underhanded attempts to derail a nuclear deal with Iran. The Journal reported on Tuesday that not only did Israel spy on Americans negotiating with Iran, but they gave that information to Republicans in Congress, in an attempt to scuttle the deal.

How does the US know this? Well, according to the Journal and its government sources, the US itself intercepted communications between Israeli officials that discussed information that could have only come from the US-Iran talks. The disclosure of this fact sounds exactly like the vaunted “sources and methods” – i.e. how the US conducts surveillance and gets intelligence – that the government continually claims is the most sensitive information they have. It’s why they claim Edward Snowden belongs in jail for decades. So while it’s apparently unacceptable to leak details about surveillance that affects ordinary citizens’ privacy, its OK for officials to do so for their own political

benefit – and no one raises an eyebrow.

We can be quite certain that no one will be prosecuted for the leaks given that they benefitted the administration’s powerful former Secretary of State, and bolsters its position in its public dust-up with Israel.

When it comes to leaks, the powerful play by different rules than everyone else – despite the fact that they’ve violated the same law they’ve accused so many other leakers of breaking. That’s why David Petraeus was given a sweetheart plea deal with no jail time after leaking highly classified information to his biographer and lover. (He’sapparently already back advising the White House, despite leaking and then lying to the FBI about the identities of countless covert officers).

It’s also the same reason why investigations into a leak suspected to have involved General Cartwright, once known as “Obama’s favorite general”, have stalled. As the Washington Post reported: the defense “might try to put the White House’s relationship with reporters and the use of authorized leaks on display, creating a potentially embarrassing distraction for the administration”.

Former CIA officer Jeffrey Sterling faces sentencing next month after being found guilty of leaking information to New York Times reporter James Risen. Sterling’s problem is that he leaked information showing a spectacular and embarrassing failure on the CIA’s part – which did not help a powerful politician score points. He is also not a general.

As a result, he faces decades in jail.

In Case You Missed It:  American Medical Association releases stunning document teaching doctors to LIE to patients while deliberately exaggerating covid death claims... the AMA admits to its own complicity in crimes against humanity
Posted in Freedoms and tagged Clinton, Snowden, United Socialist States of America.

Who was Andreas Lubitz? Germanwings co-pilot who murdered 150 passengers in deliberate Alps crash

The German co-pilot who deliberately flew a Germanwings flight into the French Alps has been named as Andreas Lubitz, who...