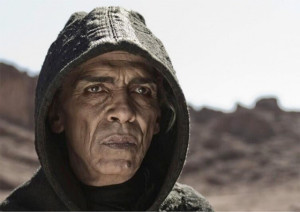 Can America’s “No Man Is Above the Law” Brag Survive the Tyranny of Barack Obama?

Justice may be a most unwelcome interloper in the life of Bowe Bergdahl, the young army Sgt. charged with desertion and misbehaving before the enemy. Ultimately, if convicted, Bergdahl could spend the rest of his life behind bars in military incarceration.

There is no sympathy for Bergdahl in this space: He apparently committed a serious crime against America. Innocent US soldiers lost their lives trying to locate him.

Bowe Bergdahl deserves to be punished to the full extent of the law, if convicted.

However, in a nation where it is fashionable to pretend that no individual is above the law, Bergdahl’s alleged crimes pale in comparison to those committed by the Commander-in-Chief, and the man sworn by oath to protect and defend the US Constitution against all enemies, foreign and domestic.

That would be Barack Obama, living proof that the American electorate is, indeed, “stupid” and vulnerable to choreographed deceit, misinformation, and outright lying by political weasels more interested in promoting a personal “legacy” and extreme ideological views than defending the American people and the American way of life.

In the scheming hands of tyrant-in-chief Barack Obama, Bowe Bergdahl was but a pawn to be exploited by a contemptuous, angry president to pursue closure of GITMO, an unmet objective in his sinister scheme to undermine America, and finally undo the works of former President George W. Bush.

Obama must have found the temptations irresistible: He could release dangerous Taliban commanders from the hated GITMO and (he assumed) gain public sympathy by rescuing a captive American soldier Bergdahl, all in one vile act of treason!

Unfortunately, Obama has the power and, more importantly, defect of character to commit such an unspeakable act of treason.

Americans can rest assured that Bowe Bergdahl will taste the bitter fruits for his vile acts.

However, the fate of the real villain is less certain: To wit, will Barack Obama be allowed to continue his reign of terror against America by escaping judgment for his treason in the Bowe Bergdahl for enemy commanders scandal?

Or is the “no man is above the law” brag more fiction than fact?

In Case You Missed It:  Scores of U.S. troops still aren't vaccinated for COVID-19; are we going to have a viable military left by the end of winter?
Posted in Freedoms.

Obama was working to replace foreign Christian leaders with fully-fledged Caliphate-seeking Islamists By Judi McLeod  The full-scale social engineering of...