On April 5th, there’s going to be a show called “BLACK GIRLS ROCK!” on BET (Black Entertainment Television) at 7 pm.

Just to be clear here, I take objection to the fact that there’s a BET at all.  If there was a WET (“White Entertainment Television”) in existence, both black AND white people all over the country would be freaking out.  Heads would literally EXPLODE.  It simply wouldn’t be allowed.  Because it’s flat-out racist.  It’s precisely what MLK Jr. didn’t want us to do – separate people based on the color of their skin.  It’s seeing people entirely based on what was on the outside as opposed to what’s on the inside.

The thing is – that’s precisely what we want to keep doing these days – and it’s absolutely because of the liberal left, who can’t see PAST the prism of race.  Not surprising it this racism is again perpetrated by the Democratic party, the same party that implemented Jim Crow laws, and slavery against blacks.  Although today blacks are not the targets of the Democrats racism, it is Whites and Asians. When will the Democratic party with a long history of racism learn to just treat everyone as equals?  Can liberals look past ones skin color,  so far the answer is a big no!

Liberals justify their racism and claim they should be allowed to practice this racism because of white racism in the past. So if your skin color it too white you many not qualify for affirmative action, or hiring quotas soley based on your skin color, it astounding today we still have open racism being practiced.

Barack Obama, Eric Holder, Bill de Blasio, and the Rev. Al Sharpton are fueling the flames of racism in America just as the Ku Klux Klan did 100 years ago. Sounds inflammatory? It is. What’s worse, it’s true.

The reason? They are considered the establishment. They are out in broad daylight perpetrating a racist agenda and, instead of wearing a white sheet to protect their identity, they are shrouded in the cloak of government.

Obama also  hosted an event at the White House last year to unveil his new racist plan based on a US citizens skin color, it called the “My Brother’s Keeper” initiative, to make sure that only young man of color will have government help, young white men need not apply. Under Obama we are not US citizens, but Black people, Latino people, Asian people and White people.

Racist Nation of Islam leader Farrakhan who calls whites devils, said that Barack Obama’s ties to the black nationalist movement in Chicago run DEEP, and that for many years the two men have had “an open line between them” to discuss policy and strategy, either directly or through intermediaries.

Trying to solve the issues of racism from the past with racism today was a terrible idea by the leftist, as most their ideas are.

The Project on Fair Representation, an Alexandria, Virginia-based legal defense fund, has filed a series of legal challenges against colleges across the country in an effort to ban discriminatory race-based admission policies outright. Basing admissions on ones skin color is bringing the United States colleges back at least 100 years.

For example schools such as Harvard is engaged in “racial balancing,” enrolling the “essentially the same percentage” of African Americans, Hispanics, whites, and Asian Americans year after year, even though the application rates and qualifications for each racial group have undergone significant changes over time. How do they choose who is admitted, by the color of ones skin of course.

Turn on MSNBC, and what are they talking about?  RACE.  All the time. Twenty-four seven. Now, imagine if you will – Laura Bush speaking at an awards show for the “White Entertainment Network,” honoring an organization called “WHITE GIRLS ROCK!” to promote young women of pallor….white girls rocking.  Imagine a white first lady doing that.

Just take a minute to imagine it, because I’m kind of tired of the double-standard here.  I’m kind of tired of everyone seeing color, all the time, everywhere, and trying to force me to see it, when I live in a house where we simply don’t see it.  My child doesn’t see it.  She’s five years old, and she doesn’t see color.  And frankly, it’s downright exhausting as a parent knowing that when my daughter finally DOES see race for the first time, it won’t be because of me.  It’ll be because of someone like Michelle Obama.  Or Black Entertainment Television.  Or MSNBC.  Or a show called “BLACK GIRLS ROCK.”   And that’ll be the day when she turns to me and asks me how black girls are different than white girls.  And I’m going to have to explain that to her.

The liberal agenda is to divide and separate, that why the Ferguson case and other like it are promoted by the left to cause divisions and hatred.

Under Obama we are not US citizens, but Black people, Latino people, Asian people and White people. Let hope someday Michelle Obama will yell “Equality for all” vs singling out Black girls, as the first lady should represent all US citizens and never single out people by race as she has done once again this week. 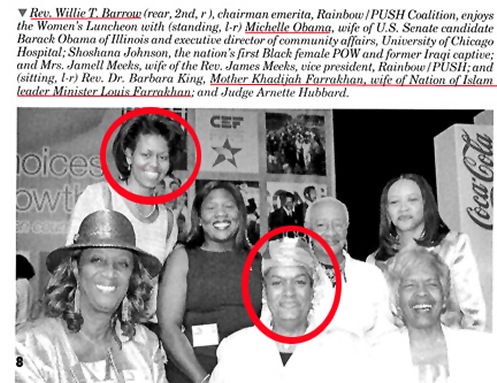 In Case You Missed It:  Trump Announces Launch of His Own Social Media Platform That Will “Fight Back Against the Tyranny of Big Tech” – CLICK TO JOIN THE WAITING LIST
Posted in Tyranny and tagged blacks, Democrats, Liberal Fascism, Liberalism, Obama, Racism.

Welcome to a surrealistic world run by Google

By Judi McLeod In the online digital world we have been googling everyone and every thing.  But long before the...