How Can We Continue To Be So Stupid? Can’t We Learn From Our Mistakes? Our political system is not working, and we are currently being destroyed from within. Our leaders rely on campaign donations to get elected, and they cater to the influences of powerful lobbyists and special interest groups that do not always have America’s best interests in mind. This system has resulted in more wealth for the millionaires and billionaires who profit from “free trade” agreements. 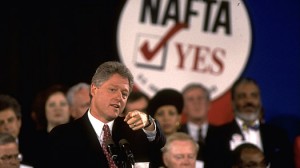 When will we wake up to the realization that some of the agreements we have signed—most specifically our agreement with the World Trade Organization (WTO) and our “free trade” agreements—are preventing us from doing what is in our best interest? Currently, we are being controlled and directed by other nations, for their benefit and to our detriment. Our current involvement with so-called “free trade” is not just hurting us – it is destroying us. One look at our current condition and present direction clearly shows we are in a downward spiral toward total economic destruction.

Today our involvement with the WTO limits what Congress can legally legislate in terms of our industrial policies. The WTO is a restriction on our sovereignty and for what? The WTO is set up so that each member country has one vote and there has never been a vote. We lose 9 out of every 10 disputes brought to the WTO against the U.S. and there are no veto powers outside the organization.

Furthermore, other countries have discovered ways to circumvent the WTO rulings in their favor. For example, China (which retains a highly protective trade stance) is a major vehicle through which Japan is able to tilt the field in their favor. In other words, countries like Japan are exporting to China and then China is exporting to the U.S. effectively bypassing any WTO sponsored trade agreements between Japan and the U.S.

Agreements like NAFTA and KORUS provide unprecedented access for foreign companies to gain entry into U.S markets. They need only export their raw goods to Mexico, assemble them there, and then drive them across the border to the U.S. duty-free. NAFTA and KORUS are unmitigated disasters. We are allowing Mexico and South Korea to export to America without restriction.

These agreements were all entered into in the name of “globalism” and “free trade,” but those terms just mean that every company can look for the cheapest labor wherever they can find it, and ship their goods back to us duty and tariff free. That is not a model for economic success in the United States. Until our politicians realize what “free trade” is doing to us, we will continue to spiral downward.

By Walid Shoebat  “The time to liberate Mecca and Medina is soon” says Ansar Hezbollah  adding “and that the world...