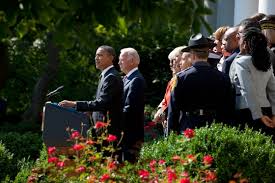 Depending on proximity to the podium at which Barack Obama delivered his victory speech about an alleged “historic” nuclear deal with Iran, at the end of the April 2 speech some of the more formidable bushes in the Rose Garden had not wilted and died from the withering effects of 18 minutes of self-aggrandizement and legacy weaving by The One.

Surviving Rose bushes notwithstanding, Obama’s vaunted deal all but vanished into thin air as Iran’s Supreme Leader, Ayatollah Khamenei, pummeled Obama with words so harsh that one must reluctantly concede that the Ayatollah, although a congenital liar and despicable tyrant himself, has unwittingly unearthed the truth about America’s number one problem: The presidency of the Barack Hussein Obama.

“Earlier today, Khamenei broke his silence on the supposed “framework” the Obama administration has been trumpeting as the basis for a nuclear accord. Khamenei’s speech pulled the rug out from underneath the administration.

Khamenei accused the Obama administration of “lying” about the proposed terms, being “deceptive,” and having “devilish” intentions, according to multiple published accounts of his speech, as well as posts on his official Twitter feed.”

Our beloved Community Organizer guilty of lying, being deceptive, and devilish?

Who would have thunk?

The innocent, but cynical, mind explodes with trepidation: Has the Ayatollah hacked into the government’s ObamaCare files and unearthed the Jonathan Gruber commentaries about the rise and fall of health care in America?

Of course we may never know exactly how Ayatollah reached his conclusions about Obama being a liar, deceptive and devilish.

Still, whatever his sources and processes, the Ayatollah is spot on in his critique of America’s unmitigated disaster at 1600 Pennsylvania Avenue!

In Case You Missed It:  The resistance begins NOW: Global non-compliance movement launched against medical tyranny
Posted in Freedoms.

These photos culled by the Middle East Media Research Institute, were posted online by ISIS and show the destruction of...