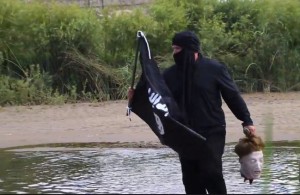 In the 11 minute video, the Islamic fundamentalist claim that jihadi groups have grown stronger since the 9/11 terrorist attacks carried out by Al-Qaeda in New York and Washington DC, and allege that Islamists have “more resources”.

Conservatives have been concern with the wide open border and the possibility of Radicals coming into the USA, all these concerns have been ignored by the left and the Obama administration, some conservatives even being called racist for wanting secure boards.

Now is a time to worry, all the conservative worries are coming true, Mexican Federal Police have confirmed ISIS is operating a camp just a few miles from El Paso, Texas.

The exact location where the terrorist group has established its base is around eight miles from the U.S. border in an area known as “Anapra” situated just west of Ciudad Juárez in the Mexican state of Chihuahua. Another ISIS cell to the west of Ciudad Juárez, in Puerto Palomas, targets the New Mexico towns of Columbus and Deming for easy access to the United States, the same knowledgeable sources confirm.

During the course of a joint operation last week, Mexican Army and federal law enforcement officials discovered documents in Arabic and Urdu, as well as “plans” of Fort Bliss – the sprawling military installation that houses the US Army’s 1st Armored Division. Muslim prayer rugs were recovered with the documents during the operation.

Law enforcement and intelligence sources report the area around Anapra is dominated by the Vicente Carrillo Fuentes Cartel (“Juárez Cartel”), La Línea (the enforcement arm of the cartel) and the Barrio Azteca (a gang originally formed in the jails of El Paso). Cartel control of the Anapra area make it an extremely dangerous and hostile operating environment for Mexican Army and Federal Police operations.

According to these same sources, “coyotes” engaged in human smuggling – and working for Juárez Cartel – help move ISIS terrorists through the desert and across the border between Santa Teresa and Sunland Park, New Mexico. To the east of El Paso and Ciudad Juárez, cartel-backed “coyotes” are also smuggling ISIS terrorists through the porous border between Acala and Fort Hancock, Texas. These specific areas were targeted for exploitation by ISIS because of their understaffed municipal and county police forces, and the relative safe-havens the areas provide for the unchecked large-scale drug smuggling that was already ongoing.

Mexican intelligence sources report that ISIS intends to exploit the railways and airport facilities in the vicinity of Santa Teresa, NM (a US port-of-entry). The sources also say that ISIS has “spotters” located in the East Potrillo Mountains of New Mexico (largely managed by the Bureau of Land Management) to assist with terrorist border crossing operations. ISIS is conducting reconnaissance of regional universities; the White Sands Missile Range; government facilities in Alamogordo, NM; Ft. Bliss; and the electrical power facilities near Anapra and Chaparral, NM.

In Case You Missed It:  Kamala Harris Poses In Front Of Communist Ho Chi Minh Bust – “The WORST Photo Op For An American In That Country Since Jane Fonda Donned A Helmet There In 1972.”
Posted in Terrorism, Tyranny and tagged Border, Illegal Immigration, ISIS, Mexico, Obama, Terrorism, US Citizen.

By David Singer Growing support for - and pledges of allegiance to - Islamic State by diverse Islamic terrorist groups...