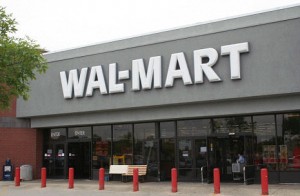 There are thousands of Walmarts in the U.S., so the fact that five of them were temporarily shut down all on the same day, all for the same reason, and all for the same estimated amount of time, may be statistically insignificant. But some workers and city officials are raising questions about what’s actually behind these six-month shutterings.

[NOTE: The story originally referred to only four stores. Walmart has since confirmed that five stores have been temporarily shuttered. The text has been updated and a statement from Walmart has been added below.]

The five stores — two in Texas, one in California, one in Oklahoma, and another in Florida — were all closed on Monday without advance notice to shoppers or the thousands of affected employees. At each of the stores, the reason given for the closures — which are estimated to last upwards of six months — was problems with plumbing.

However, some local officials are questioning the veracity of this claim.

In Pico Rivera, CA, the City Manager tells CBS Los Angeles that he was blindsided by the closure, which affects more than 500 workers in the area. As of yesterday, he said that the city hadn’t received any permit requests from the store.

Some employees at this store are questioning the motive, as it’s been a focal point of the pro-union OUR Walmart movement, and was the first location to stage a wage-related walkout back in 2012.

Walmart’s closure of a Tampa-area store is likewise being met with skepticism.

The Hillsborough County Commissioner tells WFLA that the store “didn’t mention anything about plumbing,” just “repairs and updates to the store.”

A Walmart plumbing technician, one of the 400 employees who could be out of work until the holidays, tells the station that the plumbing explanation lacks credibility.

Additionally, while this closure is being listed as temporary, a letter sent to the county claims the layoffs are permanent.

An ABC News report out of Tampa claims that no plumbing permits have been pulled in any of the municipalities where Walmart closed stores on Monday.

A city official from Midland, TX, tells ABC that his plumbing inspector was sent away when he tried to visited the closed store earlier this week to help them secure necessary permits.

And when 10 News was at the Walmart Tuesday, there were no marked septic trucks or plumbing vehicles in the lot.

“Where is everybody if they’re supposed to be working on everything where are all the trucks?” asked shopper Melissa Dupuis.

In Case You Missed It:  Man Pleads Guilty to Plotting to Firebomb Democrat Party Headquarters in Sacramento with Incendiary Devices
Posted in Freedoms and tagged job, United Socialist States of America, US Citizen.

by GREGORY ELICH One of the main features of NATO’s bombing campaign against Yugoslavia in 1999 was the deliberate targeting...