To an isolated minority of Republicans still on the fence with respect to Jeb Bush’s credentials to represent conservatives in the 2016 presidential election, any remaining doubts were emphatically trashed by Bush’s gutless, total surrender to Barack Obama in New Hampshire over these past days.

The latest airing of the Jeb Bush anti-conservative heresy took place at the “Politics and Pie” forum in Concord, New Hampshire, where Republican candidates were gathered in a town-hall type of setting to discuss issues of the day and their relative qualifications to address those issues.

It was at the “Politics and Pie” event, see reference 1, that Bush:

1)Encouraged Senate Republicans to confirm Barack Obama’s choice of Loretta Lynch to serve as Attorney General, and 2)Repeated his racist assertion that Hispanics in America illegally should not be required to adhere to existing immigration laws, but should rather be rewarded for violating the law with Executive Amnesty.

Clearly, Jeb Bush has shown conclusively that he is a disciple of Barack Obama, a role that should immediately disqualify any candidate from consideration for high elective office.

Combined with his pitiful family name, Jeb Bush should call it quits and formally join the Democrat Party….perhaps as a far-left alternate to Hillary? 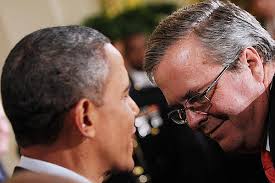 In Case You Missed It:  Explosive! Public health data: 80% of COVID-19 deaths in August were vaccinated people
Posted in Freedoms.

These Blue States Have Tried the Elizabeth Warren Model. Their Residents Are Fleeing.