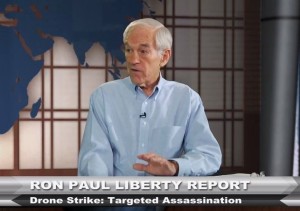 Today President Obama held an extraordinary event to announce that in January the US had killed two hostages in Pakistan. One was an American, a USAID contractor, the other an Italian aid worker. Presumably these two were killed by a drone strike as the US targeted what it believed was an al-Qaeda headquarters building.

This was big news, but what was really interesting — but not as covered by the mainstream media — is that other drone strikes in that time period killed two other American citizens who were accused of joining al-Qaeda. These Americans were not tried and found guilty of terrorism. They were executed on orders from the president. The Ron Paul Liberty Report today takes a look at this disturbing development:

In Case You Missed It:  Canada: Prime Minister Justin Trudeau Wins Reelection, But Not Majority
Posted in Tyranny and tagged al-Qaida, Assassination, Obama, US Citizen.

Rubio Takes on Export-Import Bank: ‘Government Should Not Be Picking Winners and Losers’

As hundreds of business owners, bankers and government officials descended on Washington, D.C., in support of the embattled Export-Import Bank,...