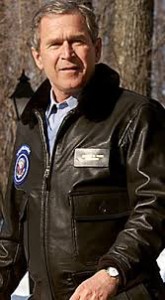 What took George W. so interminably long to come bursting through the cobwebs? Seven years of Marxist misery under the anti-American Obama administration is an insufferably long, long time.

With what will possibly go down as the best anti-Islam zinger of all time, former President George W. Bush warned Jewish donors at a closed-door meeting on Saturday night: “Just remember the guy who slit Danny Pearl’s throat is in Gitmo, and now they’re doing it on TV”.

But it will take a lot more than zingers to stop the march of caliphate-seeking Islamic terrorism.

“Bush said he views the rise of the Islamic State as al-Qaeda’s “second act” and that they may have changed the name but that murdering innocents is still the favored tactic” delivering his harshest public criticisms to date against his successor on foreign policy, saying that President Barack Obama is being naïve about Iran and the pending nuclear deal and losing the war against the Islamic State.” (Bloomberg, Mar. 27, 2015)

“Bush then went into a detailed criticism of Obama’s policies in fighting the Islamic State and dealing with the chaos in Iraq. On Obama’s decision to withdraw all U.S. troops in Iraq at the end of 2011, he quoted Senator Lindsey Graham calling it a “strategic blunder.” Bush signed an agreement with the Iraqi government to withdraw those troops, but the idea had been to negotiate a new status of forces agreement to keep U.S. forces there past 2011. The Obama administration tried and failed to negotiate such an agreement.

“Obama promised to degrade and destroy Islamic State’s forces but then didn’t develop a strategy to complete the mission, Bush said. He said that if you have a military goal and you mean it, “you call in your military and say ‘What’s your plan?’ ” He indirectly touted his own decision to surge troops to Iraq in 2007, by saying, “When the plan wasn’t working in Iraq, we changed.”

“In order to be an effective president … when you say something you have to mean it,” he said. “You gotta kill em.”

“Bush told several anecdotes about his old friend and rival Russian President Vladimir Putin. Bush recalled that Putin met his dog Barney at the White House and then later, when Bush went to Moscow, Putin showed him his dog and remarked that he was “bigger stronger and faster than Barney.” For Bush, that behavior showed him that Putin didn’t think in “win-win” terms.

“Bush also remarked that Putin was rich, divorced his wife and loves power. Putin’s domestic popularity comes from his control of Russian media, according to Bush. “Hell, I’d be popular, too, if I owned NBC news,” he said.

With all due respect, Mr. Bush,  Putin’s not running for president, your brother and Hillary Clinton are. Obama and Clinton seem to have control of the American mainstream media, and Obama’s not nearly as naive as he is deliberate and Marxist.

What’s wrong with that picture?

Now that he had the floor, just like 95 percent of the Republicans in full control of the House and Senate, Bush never once mentioned the ongoing Fundamental Transformation of America that has all but completely destroyed the USA.

Bush never mentioned that Barack Obama has left the same Republic that people from all corners of the world flocked to for a better life,  lingering towards death in a sadly tattered. post-Constitution state.

Is it that Bush can’t see it, or that he won’t see his own country well on its way to oblivion?

With the smoke of the collapsing   nation still hovering plume-like in the air,  Bush and the Repubs collecting pay checks for jobs they don’t do, cannot see the every day carnage?

Dangerous as it may be for Western society,  Obama’s nuclear deal-making with Iran is not the illness that is felling America, it is only one of its most alarming symptoms.

If, as the mainstream media claims ‘W was ripping O,’ why no mention of Obama’s deliberately ripping apart a country paid for with patriot blood, sweat and capital?

This refusal to acknowledge the deliberate desecration of America by a man addressed as ‘Mr. President’ is far more frightening than anything Iran can throw our way.

Along the course of history other presidents have brought economic harm to America—but not a single one of them, not even progressive peanut man ‘Jimmah’ Carter boasted about it.

File Bush’s waiting seven years to speak out against Obama under ‘F’ for “Far Too little, Far Too Late.”

Videotaped proof exists about how the Bushes, the Clintons and the Obamas really feel about all things American on—-—-, 2013 when all five living presidents and their wives were standing on a Dallas, Texas podium as the US Army chorus sang the iconic ‘Battle Hymn of the Republic’ during the launch of the George Bush Presidential Library and Museum.

The duration of the goosebump raising rendition was only five minutes and 12 seconds long.

This is what America’s former and first family members were doing for most of that 5 minutes:

“President Barack Obama yakked away to Barbara Bush during much of the five-minute-12-second rendition. Standing off to the far left of the podium, Michelle Obama wore her trademark scowl.  Hillary preened from behind her husband’s shoulder. “ (Canada Free Press, May 9, 2013)

Not a single one of the American hierarchy noted the deliberate decline of America under Obama’s promised transformation of what has long been regarded by millions as the greatest nation on Earth.

Stand up for America, Mr. Bush.  As any bona fide American would,  you owe the country relief from the willfully destructive Barack Obama.

In Case You Missed It:  Local Reporter Calls Riot in Atlanta “Largely Peaceful Protest” as Police Cruiser Goes up in Flames in the Background (VIDEO)
Posted in Tyranny and tagged Freedom, George W Bush, Obama, Terrorism, US Citizen.

By James Simpson Look at our country today. With manufactured crisis Strategist-in-Chief Obama, we are almost there, and Cloward and...