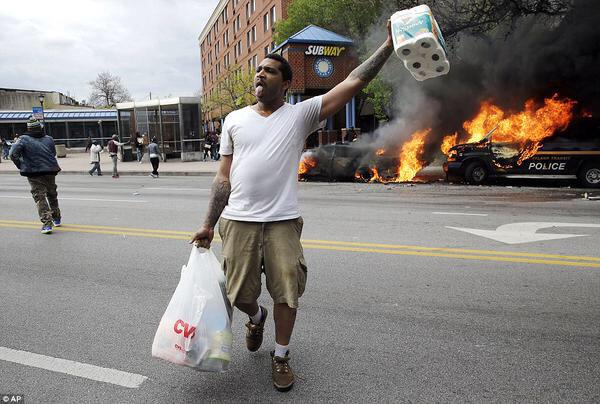 As you watch the images of violent mobs looting a CVS and then setting it on fire, along with the images of burning trash cans being thrown at police and so much other mayhem happening in Baltimore, you have to be careful not to get caught up in the media narrative of what’s animating these mobs.

This is not about making a statement concerning the death of Freddie Gray in police custody. That is their excuse, but that’s all it is. This is about seizing on an opportunity to run wild and hurt others without regard to morality, decency or anything resembling human self-restraint. These people are wreaking this havoc because they want to, and this is their chance. The fact that the news media will give them attention for it is merely a bonus. The fact that the news media in many ways provided the cue for them to do it only offers a further indictment about what we already knew about the news media.

And as the Washington Post reports, this was organized:

The Rev. Duane Simmons, pastor of Simmons Memorial Baptist Church, stood in front of his church, which is a block away from the burned-out CVS, and shook his head in frustration.

“It is heart-wrenching, but it is something that we have been anticipating,” Simmons said. “People are frustrated. It is like a rat who has been backed into a corner. These folks have had enough.”

Simmons left his church to attend a meeting of church leaders who sought to come up with a solution to the violence.

Police, though, declined to link the protests following Gray’s death to the criminal activity Monday, when television cameras captured looters casually walking out of the CVS, the liquor stores and the check-cashing store with as much merchandise as they could carry. Some posed for photos or selfies in front of a police car that had been destroyed.

The possibility of Monday’s violence began to emerge about 10 a.m., when social-media users warned of large crowds, looting and rioting at Mondawmin Mall sometime after 2:30 p.m. or after school. Several people tweeted warnings and urged their Twitter followers to avoid the mall and to stay safe. Some businesses and universities said they were warned by police that the day could turn violent. Many businesses near the mall and others downtown closed early in anticipation of trouble.

Police commissioner Anthony Batts said between 250 and 300 officers mobilized at the mall, across from Frederick Douglass High School, around the time the students were dismissed. But there were too many students in the area and throwing cinder blocks, bricks and other debris, he said.

This was no more a spontaneous protest than what happened in Benghazi. This was an organized attempt by troublemakers to take to the streets, incite violence and do damage. They are doing because they want to, because they have a pretext, and because they are convinced they can get away with it.

And most of them probably will.

By the way, while the investigation into Freddie Gray’s death is not complete so it’s too early to speculate about anyone’s innocence or guilt (not that this is stopping the rioters), this whole police brutality narrative in general is already having an effect on the ability of good cops – and they’re almost all good cops – to do their jobs. A cop friend of mine told me early this month that his department now has a policy against chasing criminals who flee.

“If we have to chase you, and we catch you and take you down, we’re probably going to hurt you,” he said. “Not intentionally but that’s what’s involved when you apprehend someone who’s trying to flee. And just about the time we’re getting you into custody, that’s when the news will show up.”

Nice job, media. You’ve ridden your narrative all the way to the point where the police are letting fleeing criminals go free, because if they do their jobs and try to catch them, you’ll turn the cops into the bad guys and you’ll give thugs like the ones now destroying Baltimore a pretext to do their thing as well.

This country is so screwed.

Today the U.S. Supreme Court will meet for more than two hours to hear oral arguments about same-sex marriage. So...