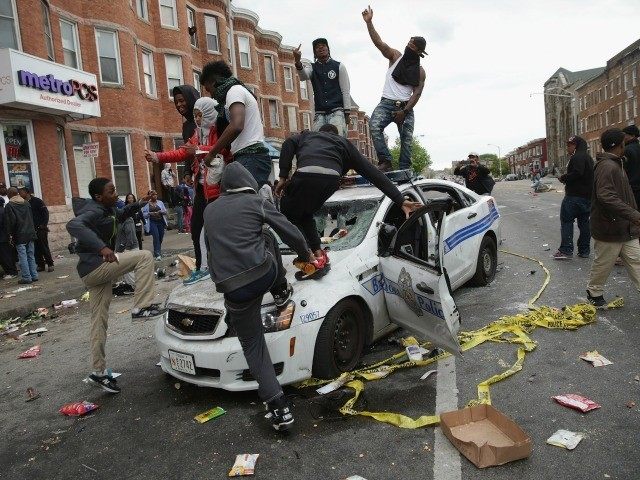 Last week the media tried to characterize the increasingly violent protests in Baltimore as “peaceful.” Now, even after the demonstrations have turned into outright riots, some members of the media are still trying to excuse the violence or are otherwise downplaying what has been going on since last Thursday.

The rioting in Baltimore has gotten so bad that now the Maryland National Guard has been called in to try and restore order, yet some members of the media are spinning the unrest to take blame off the rioters.

In one case, for instance, several stations in Maryland carried a story with a benign headline reading “Youth Converge in Baltimore,” as if rioters were attending a One Direction concert instead of engaging in violence and massive property destruction.

CNN political commentator Sally Kohn did her best to spin an excuse for the rioters ,saying that while the looting is a “shame,” the “real shame” lies elsewhere.

Speaking of CNN, the long-time cable news outlet was excoriated for sticking with its broadcast of the happy talk at the White House Correspondents Dinner even as riots erupted in Maryland’s biggest city. The “news” network preferred to stick with President Obama’s yuckfest instead of covering the growing unrest.

The network also continued to receive criticism as it tried to play catch up on Monday. For instance, after Wolf Blitzer expressed his shock at the looting, saying, “I don’t remember seeing anything like this,” the anchor was ridiculed and asked if he was on vacation during the long series of riots in Ferguson, Missouri last year.

For his part, a political reporter for the Guardian, Ben C. Jacobs, was ebullient that local gangs had become “surprisingly important” in “keeping order” in the streets of Baltimore. He even thanked gang bangers for helping him to safety.

The Washington Post even tried to blame the riots on former Baltimore mayor Martin O’Malley, who hasn’t headed the city for eight years.

Ever ready to spin the liberal line, MSNBC’s Michael Eric Dyson seemed to suggest that the cause of the riots was “lead poisoning” in the city’s water and buildings or perhaps income inequality.

Also on MSNBC, Chris Matthews reached far outside of the state of Maryland to point a finger at right to work states as the real culprit in the firebombings and widespread destruction in liberal-run Baltimore.

“You get into Baltimore, you can’t find a job with a short commute. And that’s, to me, the problem that’s behind all of this,” Matthews blurted out on his little-seen show.

This “jobs” theme echos what the Chief Executive of the Baltimore Orioles said in a long Twitter exchange Sunday night. Team executive John Angelos, son of the billionaire team owner, insisted that a lack of jobs is what really led to the riots.

Some pundits on the left are starting to outright defend rioting. “Case for Reparations” author and former Baltimore resident Ta-Nehisi Coates says calls for non-violence are a ruse: “When nonviolence is preached by the representatives of the state, while the state doles out heaps of violence to its citizens, it reveals itself to be a con.”

But not everyone appreciates the media’s “help.” The way the media has acted has incensed a Baltimore city council member. Calling it “unacceptable,” City Council President Bernard “Jack” Young is quite discouraged over how the media is covering the riots.

In Case You Missed It:  COVID THEATER: Turns out Biden's vaccine mandate for employers was a bluff; no idea when or if OSHA will ever issue rule
Posted in Freedoms and tagged Black Privilege, Liberalism, media, Riots, United Socialist States of America.

Hopefully, Rawlings-Blake will be held accountable for her words that could only have been interpreted as giving the thugs the...