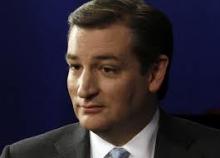 The comments were made as an influential group of Republican Jews, the Republican Jewish Coalition, who gathered at the Las Vegas casino of GOP mega-donor Sheldon Adelson.

Two Texans – U.S. Sen. Ted Cruz and former governor Rick Perry – spoke to an organization that’s boasting of growing membership but also anxious about an Iran deal that was repeatedly described as a threat to Israel’s future existence, noted the report.

“Will the subsequent maps of the world show a nation of Israel?” Cruz asked the crowd during his speech. “That’s what the stakes are.”

Republican Jewish Coalition Chairman David Flaum kicked off the meeting by calling on President Obama to “hit the pause button, negotiate a better deal,” according to AP.

Cruz, famous for triggering the 2013 government shutdown, vowed to do “everything humanly possible” in the Senate to nix the nuclear deal.

He began his speech by noting that everyone who comes before the coalition vows to stand with Israel “unless you are a blithering idiot.”

Perry also called for scrapping the agreement and called for expanded defense spending, troops on the Polish border to contain a newly-aggressive Russia and a clear posture against Islamic extremism.

“This isn’t a call to war,” Perry said. “It’s a call to the type of strength that prevents a war.”

Republicans are hopeful that concern over Obama’s deal with Iran will translate into increased support by Jewish voters in 2016.

“The political climate right now is very strong for us, and everybody here feels that opportunity,” coalition Executive Director Matt Brooks told AP.

The nuclear talks between Iran and the West have been a point of contention between Democrats and Republicans.

Several senators have been pushing for legislation that would impose new sanctions on Iran and which Obama has threatened to veto.

The Senate Foreign Relations committee recently gave the green light to a bill that would give Congress the right to review a possible final agreement with Iran. Obama originally threatened to veto the bill but later withdrew his opposition rather than face a bipartisan rebuke.

John Boehner, the Speaker of the United States House of Representatives, recently warned that the framework nuclear deal reached between Iran and world powers is an “alarming departure” from Obama’s initial goals.

He did not outline how the deal departed from initial negotiating goals, but he said Congress must fully review the deal before any sanctions on Iran are lifted.

Will Iran Attempt To Seize Control Of Saudi Oilfields?

By Steve Forbes Iran doesn’t possess a passel of Panzer divisions and have a murderous Luftwaffe at its disposal. But it...