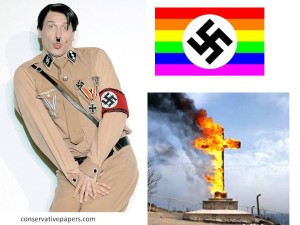 The events of recent months have emboldened the Gaystapo to plumb new depths of depravity.  Not content with having the laws of the various States overturned by unelected federal judges for the benefit of the sexual lifestyle choices of a tiny minority, nor with the increasing persecution of business owners acting on their own deeply held personal beliefs, the radical gay activists have upped the ante against those who disagree with them.

In a story coming out of Guilford County, North Carolina, two church buildings in the past month have been vandalized with explicitly pro-homosexual sentiments, using spray paint as well as perpetrating other property damage.  In an apparent attempt to silence opposition to gay “marriage,” radical homosexual “activists” (yet another euphemism for “terrorists”) have left off of words and death threats, and taken to attempting physical intimidation.

Of course this isn’t necessarily a new thing.  For the past decade, radical homosexuals have been vandalizing church buildings, attempting to intimidate the congregations.  In some cases, they have even gone further and tried to destroy the buildings outright.  For instance, some of my distantly related in-laws living in Austin, Texas saw their church torched by radical gays a couple of years ago.  However, the trend does seem to be accelerating in recent months.

You know who else liked to damage and destroy the houses of worship of those that they hated?  The Nazis.  True to the fascism that characterizes the “progressive” Left, radical homosexual activists are essentially letting their masks slip and revealing the true character underneath.

We shouldn’t be surprised.  While the Nazis were still struggling to come to power in Weimar Germany, there were actually many homosexuals in the ranks of their SA (Sturmabteilung), which was essentially the “street fighting” and “intimidation” wing of the Party, used to suppress opponents of the Nazis.  Ernst Rohm, the head of the SA, was a homosexual, and he was so close to Adolf Hitler on a personal level (he was the only Nazi leader allowed to address Hitler as “Adolf,” for instance) that it was even rumored that Hitler was gay.  It is not surprising that Rohm, before he was purged as a potential threat to Hitler’s grip on the Party, was an advocate of the “second revolution,” which would have been a violent purge of Germany’s “reactionaries” (Christians, traditional conservatives, and the like).

Here in America, the Ku Klux Klan – thought by some scholars to be the earliest example of an organization devoted to fascism, sort of a “fascism-before-fascism-became-popular-in-the-1920s” – was also big on church burning, especially as a terror tactic designed to dissuade African-Americans from asserting their equality before the law during the civil rights movement.

Which makes it all the more ironic to see gay “rights” radicals claiming to be wanting “equal rights” (which gays actually already have) and “equality before the law” (even as they seek special favors from the law).  Here’s a pro tip for you: if you have to make your case by vandalizing and burning churches, then your case is not based on liberty or the law – it is based on violence, intimidation, and tyranny.

Yet, even should the radical gays continue to step up their terrorist campaign against churches, they will only find out the same thing that the KKK found out in the 1950s and 1960s; burning down buildings does not dissuade or intimidate those who meet in those buildings.  Churches are not buildings and pieces of property.  Churches are the people who assemble together into bodies of Christ, the members one of another.  Damaging their physical property isn’t going to make them stop opposing the Gaystapo’s vile, anti-freedom agenda.

Indeed, it may end up increasing and broadening the opposition.  People can see who is in the right and who is in the wrong when one side has to start using violence to make its “points.”  For the past few decades, the gay activists successfully hid their aggressive and hateful intentions behind a mask of victimhood.  Now that they’re getting a little taste of power, it’s becoming increasingly apparent to more and more people just how corrupt they are.

I’ve said it before and I will say it again – the gay agenda is completely, utterly, totally incompatible with American freedom and constitutional liberties.  To the extent that the gays can wrestle more power to themselves, genuine liberties will be decreased.  When one side gets to force the other side to do what it wants (like bake cakes or arrange flowers) even when this is contrary to the deeply held spiritual beliefs of the victim, then you cannot say that you have a free society.  You have a coercive society.  You have lost liberty.  You have become less free.  You have taken another step toward the type of totalitarianism that the Nazis strove to implement.

Thankfully, the Nazi menace was ended.  It is time for decent everyday Americans to stand up and oppose this new Nazi menace before it takes us down the path traveled in the 1930s.

In Case You Missed It:  VAX CARPET BOMBS: Aerosolized “vaccines” being developed that can be sprayed on human cities for automatic depopulation
Posted in Freedoms and tagged homosexuality, Liberal Fascism, Nazism.

by Joe David Call the enemy what you like – radicals, fundamentalists, Islamic terrorists, jihadists, or just plain Muslims. Connect...