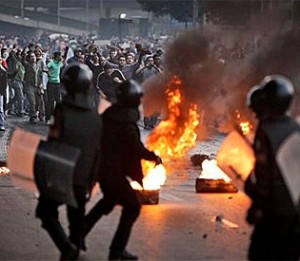 Former NYC mayor Rudy Giuliani appeared on Fox News earlier this week to talk about what else, Baltimore. Giuliani, like many others who are not Obamabots, took exception to the way the authorities in that city handled the protests when they turned into full blown riots.

Baltimore mayor Stephanie Rawlings-Blake made it quite clear she requested the rioters to be given “space to destroy” even though she later denied she said the plain words everyone heard. Instead of saying she misspoke, the mayor blamed the media for twisting her words that were more than clear. It is now being reported she had no problem with the riots saying what was being destroyed was “only property.” She allegedly instructed the police to stand down while thugs took over her city, destroying businesses, other property and throwing rocks and other objects at police.

Giuliani of course would have taken a different approach. He said the first person who threw a rock or did anything illegal should have been arrested. Ditto for the second person who commits an illegal act.

The former mayor is, of course, correct. The naïve theory employed by the mayor is that if you let people riot for a while they will eventually burn out and stop. That is nonsensical. While individuals may get tired and stop, this discounts the fact that the longer the riot takes place, the more people will find out about it and decide to join in. And, let’s face it, these thugs were rioting because it was fun, not because of what happened to Freddie Gray. Gray’s death was merely an excuse to destroy property and steal. What Rawlings-Blake did fueled the flames of destruction, and her sympathies, by her words, were with the criminals who were doing their best to destroy her city.

What was somewhat strange during the Fox News interview of Giuliani was the network constantly referring to him as ‘America’s mayor.’ If anyone actually thinks the former NYC mayor is still America’s mayor, they have not been paying much attention to what has taken place in the United States and indeed the world since 2008 when Barack Hussein Obama was first elected president.

Giuliani became known as ‘America’s mayor,’ a moniker first given to him by Oprah Winfrey after the terrorist attacks on September 11, 2001. And it was well deserved. Giuliani took charge of his damaged city as well as any municipal official could have. He seemed to be everywhere following the attacks, including Ground Zero. He showed leadership. Giuliani exuded an optimism that New York City would survive and go on and was one of the loudest cheerleaders for the view that the residents of the city should continue to do what they had been doing prior to the terrorist attacks. He encouraged people to go shopping and act normally shortly after the Twin Towers came down. Although some normal activities had to be shut down in the wake of the terrorist attacks, neither the Yankees nor the Mets ever played baseball to empty stadiums because it was “too dangerous” to go to the ballpark. Whatever anyone thought about the mayor prior to the attacks, he showed what he was made of after the attacks.

But Giuliani is not America’s mayor any more. Not because the former mayor has changed, but because the America of the early 2000s is not the America of today. Although it can be said of politicians that “they all lie” Obama does it more than most. Drawing red lines he later denies he drew, and promising Americans over and over and over again that they could keep their doctors and insurance plans if they wanted to under Obamacare are but two examples.

But there was one thing B. Hussein did not lie about. During the 2008 election campaign Obama promised if elected he would “fundamentally transform America.” Most Americans, caught up in the euphoria of electing a black president, didn’t care what he meant by that or assumed he meant an America not led by George W. Bush.

Obama has indeed transformed the United States into a divisive country where illegal immigrants are welcomed and given the rights of citizens and one that is weak on the international stage. When it comes to race relations, the violence is justified and it is the police and the white establishment that is at fault.

The United States has indeed been fundamentally changed. And Mayor Rawlings-Blake,  giving space to those who wish to destroy while instructing the police to stand down and seen walking side by side with Al Sharpton, is the face of the new America.

Rudy Giuliani is from a different era. He is no longer ‘America’s mayor.’  Stephanie Rawlings-Blake is.