Animal rights groups are appalled by a new popular trinket being sold on the streets of China – live animal key rings. 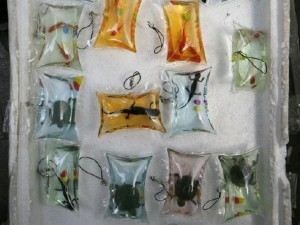 The key rings are attached to a bag filled with coloured water containing either a live Brazil turtle or two small fish.
New fashion jewelry in China, animals living under plastic containing a liquid nutrient and oxygen that allows them to live up to 2-3 months.

This is cruel and should be condemned by the international community

Vendors spoken to by China’s Global Times claimed the water contained nutrients and that the animal could live for months, however the animal would suffocate sooner because of a lack of oxygen, animal rights activists say.

Online petitions calling for the key rings to be banned have been launched – but the key rings are completely legal due to China’s lack of animal cruelty laws.

Qin Xiaona, director of the NGO Capital Animal Welfare Association, described the trinkets as “immoral and pure animal abuse” – but said they were legal.

“China only has a Wild Animal Protection Law,” Qin told The Global Times. “If the animals are not wild animals they fall outside the law’s scope.”

One woman spoken to by the paper said she planned to free the creature, while a man in his 30s was going to hang the key ring, containing a turtle, on the wall in his office.

“It looks nice and brings good luck,” he said.

Sign this online petition to stop this barbaric practice (HERE)