It’s time for small-c conservatives to drop the in-fighting and to energize the fight that matters: fighting for survival in a world going socialist.

The commonsense nurtured in today’s generation by their forbears, stored in the indomitable spirit of small-c conservatives, the only stores of it left in an upside-down world.

As anyone can tell you, things are getting depressing out there, and it‘s going to get a lot worse before it gets better.  Every day, sometimes every hour there’s troubling news of yet another Big Government policy impacting individual freedom, making it all the more crucial for conservatives to stick together.

Conservatives should stick together if only to boost each other’s morale.  Positive morale will be needed more than ever in days ahead.

Stop getting caught up in things that don’t matter.  Whether Bruce Jenner is a he or she doesn’t matter to anyone but Kardashian Inc. Reality TV, and him, or whatever he was at last checking.

Toss government propaganda out to the curb on the next garbage day.  Recognize reality for what it is without the government spin.  The police in Garland, Texas foiled the first ISIS terrorist attack on American soil on Sunday.  The government has done nothing but deny their reality.

The $7 million, $5 million and $3 million bounties placed on the heads of the top ISIS leaders is so much bunk.  Why would the State Department pay out those kind of bounties for “information” on ISIS, when the current White House administration won’t even name them?

The government has been in deep denial on terrorism, ever since Barack Obama claimed he put al Qaeda on the run.

Don’t rely totally on Facebook or Google for up-to-the-minute news.  Their news has been badly tainted ever since they threw in with the Government.

Next time you see one of those absurd Facebook claims that ‘So and So’ “just carved a new one” for Hillary, Lois Lerner, etc., ignore the hype.  Put your faith in the few people of action like Milwaukee Sheriff David Clarke—and other truth tellers who don’t lay Google-like claim on the truth.

Sheriff Clarke posits that if Black lives really mattered the Ferguson and Baltimore protesters would be outside abortion clinics because of the high numbers of black babies killed by abortion.

How’s that for Tweeted Truth?

Stop following ratings and traffic-seeking television and news site operators into cemeteries.  Teddy Roosevelt, Woodrow Wilson and FDR are dead and gone.  It is the alive and kicking zombies of the Obama regime who are the problem.

Go into the cemetery only when you have to.

Recognize the ‘sources’ from which you’re getting the news.  It wasn’t the overnight discovery of police brutality that brought violent mobs to Baltimore. As commenter Jim Jersey of the Ted Cruz 2016-Peoples Choice Facebook thread suggests, “the riots were started by the call to arms by people texted, just like they do with flash mobs.  The Text message read that there would be a “purge” in Baltimore city that day/night.”

The result of the purge?

The Crips and Blood gangs protected Black businesses by standing in front of their stores while “someone” directed the rioters to move onward to where all the minority stores were.  As many as 200 Asian stores were purged and put out of business. 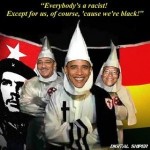 Real racism at work right under the noses of Al Sharpton and Jesse Jackson.

You can’t put a smiley face on what you’re up against:

‘Obama: My ‘Project’ Continues After My Presidency (Weekly Standard, May 5. 2015)

“In remarks last night to Democratic donors in New York City, President Obama talked about the “project” he started continuing after he leaves the White House.

“Now, I intend to get as much done in the next 22 months as possible.  As you’ve noticed, I’ve been pretty busy—(laughter)—and I will continue to be.  And I’m hopeful that we may find some opportunities for collaboration with the Republican Congress—for example, on trade.  Hopefully, on infrastructure.  There may be some things where there’s some convergence.  But if we’re going to deliver on the promise that’s there for all of us, then we’re still going to need to realign our budgets to our values, and we’re going to have to fight for priorities like immigration reform,” Obama said, according a transcript provided by the White House.

“And those battles are going to depend, in large part, on the continuing effort in the political arena.  And we’ve got to have strong candidates.  But more importantly, we’ve got to have an engaged citizenry.  And that’s why, despite the fact, as Michelle helpfully reminds me, I don’t have another race to run—(laughter)—and she’s pretty happy about that—that’s why I’m here this evening.  And I know that’s why you’re here.  Because this is not a project that stops after a certain term in office, and it’s not a project that stops after an election.  This is something that we have to sustain over the long term.”

Obama’s legacy will be fulfilled, not only by whatever Democrat president comes next, but by turncoat Republicans like Sen. Mitch McConnell, busy feather-nesting and saving themselves first on an ‘every man for himself’ motive.

Given the lack of backbone among the useless Republicans,  they would provide tons of the fruit-flavored powder necessary to start up and nationalize a new Jello Industry.

Don’t give up on hope.  That’s what Obama, Clinton and the Democrats, all cut from the same hole-ridden, rotting cloth, want you to do to make their job easier.

Turn to the Almighty if you haven’t already.

In all earthly matters, forget the Smiley Faces on Facebook.  Do everything possible to boost the morale of your loved ones and friends.

Let the morale boosting begin and keep building on it no matter what.

BALTIMORE—At the end of the most hopeless of weeks, after Freddie Gray’s tragic death in the custody of police led...