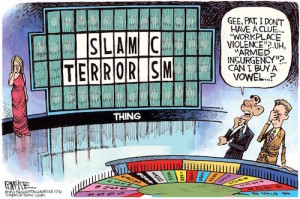 It is not a stretch to say that when it comes to the topic of international Islamic terrorism, the president and the people differ as starkly as night and day.

Just because there was no official response from President Barack Obama to the latest terrorist threat that they have “71 trained soldiers in 15 states” “with 23 signed up already for missions”,  doesn’t mean the unanswered threat has left American citizens quaking in their boots.

“The terrorists also say they have 71 fighters in 15 different statesand they 23 have signed up already for missions like the failed Sunday attack in Garland, Texas.” (Gateway Pundit, May 5, 2015)

With Obama continuing to set convicted terrorists free from Guantanamo Bay; allowing terrorists in to the U.S. with the ongoing flood of illegals over the undefended U.S./Mexico border, Americans know that there are likely far more than “71 trained soldiers in 15 states” now hiding in sleeper cells across America.

Try as they might,  the Islamic terrorist camp can’t write off what happened in Garland, Texas on Sunday night:  Police foiled the first ISIS-connected terrorist attack on American soil.  They not only foiled it, they foiled it quickly and effectively.

No matter how they write up the scary script threatening unleashed lions on courageous Pamela Geller notwithstanding, the days of Elton Simpson and Nadir Soofi being able to plot terrorist attacks on innocent civilians are gone forever.

Of all the grisly beheading videos sent over the Internet, the most indelible one trumps the latest terrorist script intending “to show how easy we give our lives for the Sake of Allah” with one that irrefutably proves the lives of terrorists can be snuffed out before they get to carry out their missions.

Even with the ACLU, CAIR and other American organizations running interference for them—even with the apparent support of America’s most anti-American president in its back pocket,  Radical Islam’s intention to force Sharia law on the 300-plus million American population is an unattainable pipe dream.

Obama may be soft on terrorism, but Americans, like the people of many other countries, are not.

Americans have their own Christian God and will never consider the god of Islam theirs.

Radical Islamist terrorism may see Obama as a friend, but as a Canada Free Press commenter pointed out only this morning, Americans see him as “the greatest PR man to stimulate gun sales”.

“I have lived in Garland.  Garland has one of the toughest police departments in NE Texas,” the commenter wrote.  “They do NOT put up with PC nonsense of the idiots that think they can attack us.”

“According to data compiled by the FBI, the number of Americans purchasing guns has skyrocketed since Obama was elected.

“There have been 65,376,373 background checks completed for Americans purchasing firearms since February of 2009, the first full month of Barack Obama’s presidency.

Waiting comfortably in their sleeper cells while taking advantage of all the things America has to offer, Islam’s “trained soldiers” must surely have noticed by now that Americans, are above all else, hardy survivors.

Even the terrorists must have noticed that while, just like them, 50% of Americans take full advantage of all the Big Government hand outs, the other 50% at whom Obama has thrown everything but the proverbial kitchen sink, have survived him.

Islamic terrorists may think that with the many benefits extended them by Obama, America is easy pickings, or that their evil beheading videos have utterly cowed its population through intimidation and fear. But they think wrong.

The terrorists think Americans are just sitting back waiting for the next promised attack.

And they are sitting back waiting—-locked and loaded.

2015 Salvatori Prize Awarded to American Council of Trustees and Alumni

The Heritage Foundation has awarded its 2015 Salvatori Prize for American Citizenship to the American Council of Trustees and Alumni...