Human rights activist Pamela Geller has brought to attention an interesting analysis from one of her readers: 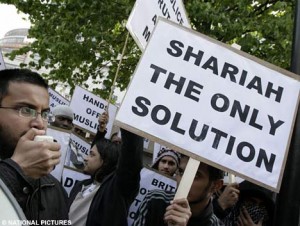 Recently, after reading parts of the Koran, I have become a bit frustrated that no one seems to understand the magnitude of the Muslim threat. People look at at the Pew report and they seem to think that the results are mixed, and that there really “aren’t that many” radical Muslims. So I sat down today and actually ran the numbers; I’m attaching a page from that analysis which shows my results. My hope is that you may wish to publish them, or portions thereof, in one of your columns.

It doesn’t take a rocket scientist to realize that with 1.6B Muslims, even if 10% of them were radical, that’s 160 million people: about half of the total US population. But in looking closer at their survey, I’d put the number closer to 25%.
My analysis focused only on the questions about Sharia law: (1) Should the law of the land be Sharia law?; and (2) should that apply to everyone, including non-Muslims? Pew asked question (1) in countries that account for about a billion Muslims, and question (2) in countries that account for about 830 million. If you accept their results in just the countries they surveyed, we learn that:

— 70%, or 700 million Muslims out of the billion represented by Q1 of their survey, want Sharia law to be the law of the land;

I don’t know about you, but I’d say that alone represents over a quarter billion “radical” Muslims, with only just over half (53%) of their total population accounted for by the survey.

But we can make reasonable (and conservative) assumptions about the rest of them, and the results are even scarier. I extrapolated Pew’s results in each region (e.g., Central Asia) across the whole region, using the smallest percentages that they found for the countries in the region they did survey. The lower-bound estimates I get for the world Muslim population are as follows:

That’s 24% of all the Muslims in the world that are, by my definition at least, radical. And that’s more than the population of the US and Canada put together.

I’m just sending a one-page .pdf file. You can have my spreadsheet if you are interested. And if you aren’t sure of the soundness of my methodology, ask someone who is a statistics expert to review it. Ask Pew, if you have a good relationship with them. In fact, let anyone who wants to review the data and methodology see it, because such is the nature of peer review. Until it’s vetted by experts, they’ll just call it right wing nonsense. Of course, there’s nothing in here that would be difficult for anyone who got at least a B+ in an introductory statistics course at a decent college or grad school.

The homeless population of Los Angeles County - already the second largest in the nation - grew by 12% over...