One of the two sitting U.S. Congressmen who happen to also be Muslim was caught working together with a known frontman and fundraiser for terrorist groups. 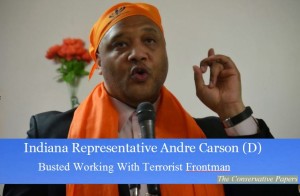 Indiana Representative Andre Carson (D) took part in a major Islamic convention in Chicago this weekend.  The convention was hosted and sponsored by the Muslim American Society (MAS) and the Islamic Circle of North America.

Carson was a featured guest on a panel discussing the events in Ferguson and beyond.  He was joined on that panel by a man named Mazen Mokhtar, who is known for operating an Al Qaeda website and fundraising for the Taliban.

It is presumed that Carson knew who Mokhtar is, and it is certain that the FBI knows who Mokhtar is, as he was named in a 2004 federal investigation of a UK-based Al Qaeda website that raised money for the Taliban, among other terrorist organizations.  Mokhtar stands accused of operating a US-based mirror website of the one in the UK, according to PJ Media.

As per the Washington Post:  “Mazen Mokhtar, an Egyptian-born imam and political activist, operated a Web [sic] site identified in an affidavit unsealed Friday by the U.S. attorney’s office in Connecticut. The Web site solicited funds for the Taliban and Chechen mujaheddin, according to the affidavit. It is an exact replica of Web [sic] sites operated by Babar Ahmad, who was arrested in England on a U.S. extradition warrant this week.”

A CNN report further explained: “Law enforcement sources identified the man as Mazen Mokhtar, 36, of New Brunswick, New Jersey.  Those sources said Mokhtar is the “specific individual who resides in the United States” referred to in the affidavit as working with Babar Ahmad to solicit funds for the “blocked organizations … in an effort to support their goals.”

Somewhat predictably, once Mokhtar was named in the affidavits, he was embraced even tighter and promoted by the Islamic community.  Mokhtar currently serves as the executive director of the MAS (Muslim American Society), a group described by federal prosecutors in federal court in 2007 as “founded as the overt arm of the Muslim Brotherhood in the United States.”

Perhaps when Congress gets around to taking up and passing a measure naming the Muslim Brotherhood  an official terrorist organization, then people will take such actions such as Rep. Carson’s for what they are, and not overlook or sweep them under the rug.

Please share this on Facebook and Twitter if you are actually somewhat shocked that a sitting U.S. congressman would take part in an event with a known terrorist group frontman.

House Majority Leader Kevin McCarthy tells The Daily Signal that a short-term extension of the Highway Trust Fund is the...