A pro-Palestinian Facebook group is being criticized after posting a Photoshopped image of Nazi concentration camp inmates holding up signs comparing their plight to that of Palestinians.

The group, “I Acknowledge Apartheid Exists,” which boasts more than 91,000 Facebook “likes” posted the altered historical photo last week, in which victims of the Nazi Holocaust were made to appear to be holding signs including the slogans, “Break the silence … on Gaza!!,” “Israel Assassins,” “Stop the Holocaust in Gaza,” and “Free Palestine” alongside a Palestinian flag.

The photo was embossed with the title, “What ever happened to ‘Never Again?’” 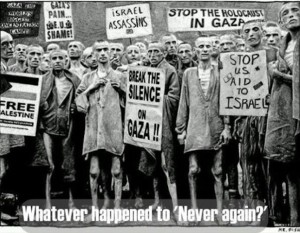 William Jacobson of the conservative blog Legal Insurrection first reported on the posting of the image and discovered that it had also been shared by another group, the Central NY Committee for Justice in Palestine, which later took it down following Jacobson’s Friday report.

Supporters of the movement to boycott Israel, known as the Boycott, Divestment and Sanctions (BDS) movement, promote the comparison of the situation of the Palestinians to that of the black community during apartheid-era South Africa and the boycott efforts that followed.

Other pro-Palestinian activists have also tried to draw an analogy between Palestinians today and Jews who were rounded into concentration camps and methodically executed en masse during the Holocaust.

“How do you reason with such disturbed people?” asked blogger Jacobson, who is also a law professor at Cornell University. “We are dealing with some really sick minds when it comes to the proponents of the Boycott, Divest and Sanctions (BDS) movement propaganda machine.”

“To compare, as they often do, Israel’s response to Hamas and Islamic Jihad rocket fire from Gaza to the systematic industrialized extermination of Europe’s Jewish population not only is grossly inaccurate, it reflects a commitment to demonizing and dehumanizing Israel beyond a political or military dispute,” Jacobson wrote.

“While I’m all in favor of dialogue, I don’t know how you try to reason with people like that, who have lost all touch with reality and truth,” Jacobson added.

Commenters including those who described themselves as sympathetic to the Palestinian cause posted criticism about the photo on the group’s Facebook page.

One Facebook user wrote, “This is so wrong on so many levels I don’t even know where to start! It’s abhorrent. And it isn’t just Jews that were butchered and gassed in the millions by the Nazis. Gays, black people and basically anyone else who wasn’t white with blonde hair and blue eyes. If you really believe this is comparable to anything going on in Gaza you are a fool. Please take this down its extremely offensive.”

“This isn’t just distasteful. Like some of your more recent postings it’s out and outright anti-Semitic, incredibly unpleasant, inappropriate and sullies the name of everyone who is trying to oppose Israel’s actions on Palestine,” wrote another commenter. “So I’m off. Straw that broke the camel’s back. And I suspect a lot of the rest of us will not want to be associated with postings like this or see them in our feeds. Certainly don’t want them appearing in my public feeds and be associated with this.”

The comparison of Israel to Nazi Germany was promoted in August by Khaled Meshaal, the political chief of Hamas, who told Yahoo News, “What is the difference between what [Israeli Prime Minister Benjamin] Netanyahu, [Defense Minister Moshe] Yaalon, and [Israel Defense Forces chief of staff Benny] Gantz are doing — killing thousands of civilians, children, women, entire neighborhoods, targeting mosques, destroying hospitals and [United Nations Relief and Works Agency] schools — what’s the difference between that and what the Nazis did in the 1930s and ’40s? And what Hitler did. This is the real holocaust.”

One of the two sitting U.S. Congressmen who happen to also be Muslim was caught working together with a known...